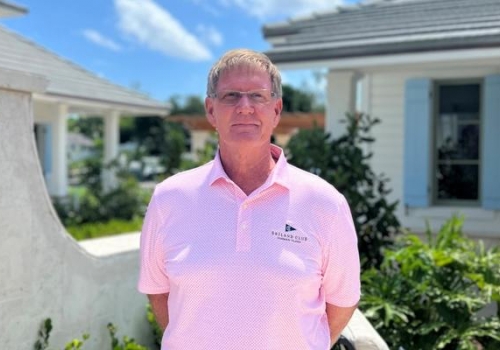 Kirk, a long-time Harbour Islander, took over the role following talks with Briland Club owner Michael Wiener, who is developing the 27-acre site into one of the world’s leading lifestyle destinations encompassing residential villas and cottages, shopping and leisure, as well as the region’s premier megayacht marina.

Kirk joins BCM following a three-and-a-half-year tenure in the Turks and Caicos, transforming a two-star hotel into the five star luxury Relais & Chateaux at Pine Cay. Previously, he ran The Cove Resort on Eleuthera, the Bahamas.

“I live here - I came down here 24 years ago  - and my boys grew up here and both run businesses here,” says Kirk, who originally hails from Canada’s West Coast.

“I’m a hotelier and I’ve had many discussions about this with Michael over the years. Michael is a friend. He would often come to my son’s restaurant where we would talk about the island and plans. There was always a level of interest to work together.

“This is not such a different role for me. I’ve managed development projects at every hotel at which I worked. Pine Cay had a small marina – although not the size of Briland Club Marina.

As GM, Kirk will oversee the growth of the marina and its infrastructure as well as ongoing construction of a number of villas and cottages on the site which will represent the residential and hotel component of Briland Club. A state-of-the-art sports and leisure facility, pool and crew quarters are also part of the development.

“What’s exciting for me is that this is a business I know and I’m also close to my kids,’ adds Kirk. “Michael loves the Bahamian people. A community first approach has been needed for a long time. It’s good to see someone who wants to contribute to the island and to preserve the authenticity which already exists here.”

After many fruitful and successful years as a businessman and hotelier on Harbour Island and The Bahamas, Kirk is looking forward to being part of the expansion of Briland Club Marina into one of the crown jewels of the Caribbean and a leading superyacht marina worldwide.

“I like to leave a place better than when I arrived - everything I do, I want to be successful,” he adds. “The true joy is letting the facility become exactly what it can be, and provide a level of service which will make everyone proud.”

“At this stage in my career, the real excitement for me is in seeing people advance in their training programmes, take pride in their job, and make everybody proud. Watching others go above and beyond what they thought their ability was is a joy.”

Accommodating a range of vessels from 70ft to over 250ft, Briland Club Marina is surrounded by charming features including Dunmore Town – the first capital of The Bahamas – where the iconic, typically Bahamian pastel painted cottages remind visitors of the charm of a bygone era.

Read on to discover the exciting activities planned for Independence Day Celebrations at Briland Club Marina!