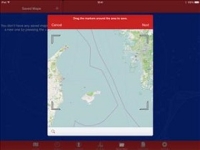 Prepare for the new season with latest version of boating app for iPad and iPhone. Ready for sailors who are planning to use a digital logbook this season to record and track their adventures, WaveTrax 1.0.7 features an updated capability to save free maps.

The latest version of the popular marine logbook app for iPad and iPhone allows users to save maps for off-line use so they can view journey tracks and logs even without an internet connection.

Maps can be downloaded using Wi-Fi or a good 3G/4G signal and prepared before a journey to save data download fees or roaming charges while outside the user’s home country and also to extend the battery life of the device.

WaveTrax works with no phone signal and the GPS will track using saved maps that are recalled from the device memory. Even with no moving map available during a journey, the correct map overlay will be automatically added to the journey when the trip data is synced back to the user account.

WaveTrax offers users the ability to permanently record and capture their voyages in a convenient and secure digital format. Providing a real alternative to the more expensive and limited paper logbook, the WaveTrax app and its user website allows all the information which is normally written into a paper logbook to be managed, enhanced, presented and shared via social media. To make the most of WaveTrax, user guides including the new Saving Maps Guide are available at www.wavetrax.com.

WaveTrax 1.0.7 can be downloaded now for £9.99 through the iTunes store (search for ‘sailing logbook or marine logbook’) or visit www.wavetrax.com. The web-app is free on 30-day trial then chargeable at local equivalent currency to GBP4.49 per year (free to app users).

WaveTrax™ is a marine logbook app owned by RiverIsle Ltd and launched in January 2014. Following extensive testing and product development by app development company AppCreatives.co.uk, the introduction of WaveTrax represents the next stage in the evolution of the marine logbook for sailors and boaters worldwide. The WaveTrax app harnesses the power of mobile technology and GPS to simplify how sailors traditionally log their journeys on paper-based logbooks and adds a number of unique features to create the world’s most fully-featured logbook app for sailing.

RiverIsle director Paul Cuss has worked in the Telecoms and IT markets in leadership positions for over 25 years, including CEO of mobile software companies, following earlier employment in the oil exploration industry. He is also a passionate sailor.

Key features of WaveTrax include:

• Automated logging using a device’s GPS to accurately capture data like speed and heading. Time-stamped log entries are created on the hour, at set distance markers, whenever Mode is changed and when a note or photo is added. WaveTrax functions with or without internet connection. Wi-Fi only iPads need a Bluetooth compatible receiver.

• Live Dashboard shows real-time trip data including time, distance and speed. Position is tracked with built-in nautical maps, which can be streamed for free or downloaded for offline use. Journey can be paused and Modes changed between Sailing, Motoring and Sailing/Motoring.

• Departure and destination ports, boat, skipper and crew set for each trip.

• Logs can be signed on in-built write pad or signed by the skipper.

• Trips are synced to the WaveTrax website and stored where they can be viewed and edited. An overview of activity includes engine hours and night hours. PDFs of logs can be printed and logs can be created of past voyages.

• Trips can be shared on Facebook, Twitter and email from both the App and the website. A completed voyage can be shared by exporting a GPX track straight from the App.

• Boating Certificates and other important documents can be uploaded and shared from iPhone or iPad.

• Crewmates and boats can be added and shared by scanning the QR code generated by the App.