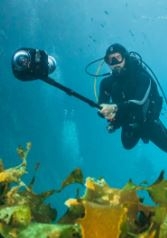 What could be better than your charter guests being able to re-live their underwater experiences in a realistic way? Creating memories is the most important part of any trip and whether private or chartered every yacht owner and crew wants their guests to step off the boat with memories to cherish and share.

Making this possible, Boxfish Research has released a major upgrade to their professional underwater virtual reality (VR) camera, the Boxfish 360, which can now record three hours of continuous 5K-UHD video or time-lapse photographs on one charge. Combined with a unique post-production App for Windows and Mac, the Boxfish 360 also greatly reduce the time it takes to film, edit and online your videos, so you could be diving and sharing your underwater experiences on the same day!

The Boxfish 360 is the only 360 camera specifically calibrated for underwater use, with a depth rating of 300m, and an App that creates ready-to-render project files, reducing much of the headache of post-production. It also records depth, temperature, and compass heading along with the imagery and this can be integrated into informative video captions, HUD-style overlays, or used independently. Danny Copeland, freelance underwater filmmaker and Media Manager for the Manta Trust comments, "I've shot with several underwater 360 rigs, and the Boxfish 360 is by far the most reliable and easiest to use. And the way it handles is just like a regular underwater camera, with a single hatch to access the memory cards and a button to start and stop the recording. With the Boxfish 360 I don't have to get up an hour before everybody else anymore!"

This innovation in underwater filming is also popular with universities and institutes for habitat documentation and outreach, allowing researchers and educators to bring the oceans to the world ashore. 360 video combines intense interaction and photorealistic environments, two essential features for an awesome visual experience. As well as for personal use, the Boxfish 360 facilitates a unique approach to teaching, allowing you to move your head and immerse yourself in the underwater world as if you were really there. Universities such as Stanford are using 360 video for education and training purposes:

VR Simulation Transports Users to the Ocean of the Future

While New Zealand Geographic recently used the Boxfish 360 to produce:

The Mystery of the Talking Fish

Boxfish Research is innovating underwater observation with remotely operated vehicles and video equipment built for scientists, educators, filmmakers and adventurers. Focusing on ease of use and high quality data capture, Boxfish Research is expanding the possibilities for humans to understand and experience our underwater world.

Please visit our website for specifications of the Boxfish 360 and purchase information.