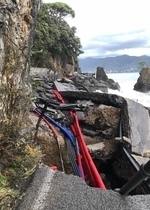 After the severe storm that battered Liguria on 29 October causing widespread damage and disruption, the municipalities of Portofino, Santa Margherita and Rapallo have come together in a coordinated effort to repair the damage in time for the start of the yachting season next spring.

Liguria experienced similar storms in 2008 and 2011 but this time the wind was stronger than expected, reaching 180km per hour with pounding rain and swells up to 8m.

Advance warnings had prompted the closure of schools and businesses and the port authorities in Rapallo had ordered the evacuation of all crew onboard yachts the night before, so casualties were avoided. Numerous boats and yachts were wrecked after breakwaters were damaged

However, the marinas in Santa Margherita and Rapallo both incurred significant damage as waves toppled the breakwaters causing serious damage to vessels in port with many ending up on the beach. Local authorities and residents have since been hard at work to clear the wreckage and debris which is due to be completed this week.

“Currently yachts are advised to avoid Rapallo and Santa Margherita as the breakwaters are damaged.” said Laura Orrechio, maritime agent at Pesto Sea Group in Portofino. Further west the marina in Portofino was relatively untouched but the main road connecting Portofino and Santa Margherita was badly damaged and remains closed for repair. As well as causing problems for hotels, businesses and residents, Berlusconi’s son and family are living in a villa in Portofino, so the pressure is on for a fast recovery.

“At the moment, to reach my office I have to go by boat” said Laura, ”but the municipality has organized public transport so there are four to five trips every day.”

She also praised the spirit and camaraderie of the local community saying “Sometimes from a bad situation good things come. And luckily the storm happened after high season so it’s less of a big problem for local business.” Getting Ready for Next Season

With repairs now well underway, the good news for the yachting community is that Portofino, Santa Margherita and Rapallo will be fully operational from April/May 2019.

The main road between Portofino and Santa Margherita will be repaired, while in Santa Margherita partial damage to the breakwater will be rebuilt, probably in conjunction with a windfall opportunity to expand the port to include berths for yachts over 60m. In Rapallo, despite the wreckage on the beach the promenade itself remains intact and the destroyed breakwater will be fully rebuilt.

Further inland most of the villages were relatively spared as was Cinque Terre where general cleanups and repairs are also underway. Hiking paths will remain closed until they have been fully cleared of fallen trees but otherwise there are no major issues for visitors to the area.