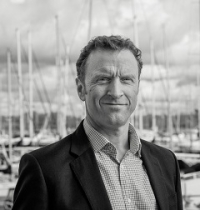 John started his career in the marine industry working for his family’s boat sales business in Scotland during school holidays. Upon completion of his studies, he joined the company full time, initially in the engineering department and later moving into sales.

Since closing his first deal at age 17, John has continued his career predominantly in brokerage and new boat sales, but he also has worked as yacht crew.

Having spent time living and working in New Zealand, Spain, America, the UK and Monaco, John is both well travelled and has an expansive network, which adds to the comprehensive knowledge he is able to offer his clients.

During his career, John has worked with a wide variety of yachts and has represented both buyers and sellers from Europe, Asia, North and South America and Australasia.

Now with Northrop & Johnson, John will focus on the sale and purchase of large brokerage and new build yachts.