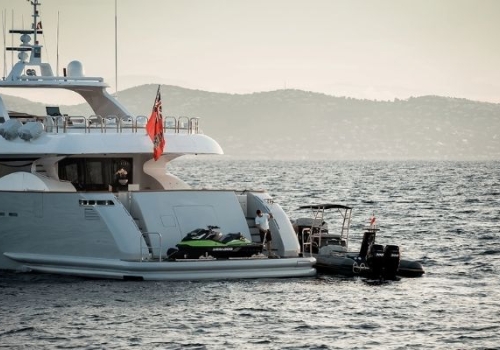 Superyacht tenders have been getting bigger, faster and more expensive for many years. Popular destinations for superyachts have seen new local laws being passed to protect sensitive seabeds. This means that yachts are being forced to anchor in deeper waters further from the shore, resulting in a trend towards larger, more plush tenders to ferry passengers to and fro.

Along with tenders increasing in size and capability, the towing of tenders has also become common. Many of these luxury tenders have their own sophisticated navigation systems, including independent AIS, however regulations do not allow AIS to be in use whilst a vessel is under tow. Also, tracking a tender once it’s adrift is too late - captains and owners don't want to lose it in the first place.

Enter TowPro, a new technologically advanced solution by the innovators at TSM Systems.

TowPro is the only system in the world that comprehensively monitors the tow, to prevent and protect the captain from losing it.

TowPro continuously streams live safety information from the tender to the yacht, where it is displayed to the crew in real-time on a touchscreen installed on the bridge. It provides three groups of safety information: water levels in the tender, including bilge pump activity and battery life of the pumps, shock loads on the tow from any surging or yawing, and the motion of the tender - trim, pitch, listing and rolling.

Whilst TowPro is monitoring exactly what is happening with the tow, it will give a warning signal immediately and directly to the bridge of the yacht if something happens that might be a risk to the tender. It is the only product able to flag up these danger signals instantly, thus enabling a response before it’s too late.

TowPro is designed to be very easy to install and requires minimal disturbance to the existing systems on the yacht.  There is no requirement for a new antenna nor any cables to run aft on the yacht.

William Ferlazzo, Head of Sales at TSM Systems, comments: “Given the peace of mind that TowPro brings during the tow coupled with the potential of insurance led towing restrictions being reduced, including night-time towing, it is no wonder that TowPro has received such positive feedback from the industry.”

If despite best efforts, the captain does lose the tow, TowPro activates the tender’s Emergency AIS to identify it as a hazard to other vessels and sends frequent position reports by satellite to a global tracking website in order to aid recovery with a back-up battery offering at least seven days continuous operation.  TowPro also triggers the COLREG lights ‘not under command’ to alert nearby vessels and avoid collision.

Paul Miller, Director of underwriting at Millstream Underwriting is very supportive of TowPro and reaffirms that: “it doesn’t just benefit insurers, it will benefit the owner, the captain, their plans, the boat, charter guests and managers alike.”