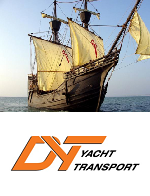 While observing yachts onboard ships can be an amazing sight, even Captain Jack Sparrow would have been impressed watching the historic replica of Ferdinand Magellan’s galleon, NAO Victoria, sail onboard DYT Yacht Transport’s semi-submersible yacht carrier, Super Servant 4, in Palma de Mallorca, Spain on November 28th. Dedicated to yacht transport of yachts of all sizes, DYT is best known for its fleet of unique ships that submerge to a draft required by the yachts loading to safely and easily sail on and off. Upon her arrival in Port Everglades, Fla. mid-December, the 25.9-meter (85-foot) carrack will sail to St. Augustine for the Christmas holiday before beginning a cultural exhibition tour that will take her along the coast of Florida and up the U.S. East Coast to educate the public about the first complete circumnavigation of the world by Magellan’s expedition in the 16th Century.

Leave Nothing to Chance
“Although she can sail perfectly on her own keel, she would take nearly two months to get from Spain to Florida, so we decided to ship her to reduce the voyage time,” said Eduardo Almagro Blanco, the general manager for Fundacion NAO Victoria, the Spanish not-for-profit foundation that manages NAOVictoria along with El Galeon, another historic Spanish replica. He added that the organization chose DYT based on its credentials, unique float on/float off loading method, and timely schedule. The original NAO Victoria, launched in 1519, was one of five ships in the Portuguese explorer’s Spanish expedition to discover the passage between the Atlantic and Pacific Oceans known as the Strait of Magellan.  After his death and under the command of Juan Sebastian Elcano, it became the first ship in history to complete the 32,000-mile voyage in 1522 and the first ever to successfully circumnavigate the globe.  In 1570, the original ship disappeared without a trace during a treacherous storm while underway from the Antilles to Seville. Not All Who Wander Are Lost
The replica of the NAO Victoria was built for the Universal Exposition of Seville in 1992.  Directed by Ignacio Fernandez Vial, extensive research and in-depth analysis was conducted on 164 written and iconographic documents from different Spanish historical archives, 126 drawings and engravings, 22 affidavits, 18 treaties on naval construction, and three wrecks. “Florida residents and visitors are eager to participate in the unique experiences that the vessels from the NAO Victoria Foundation have to offer,” commented Florida Secretary of State Ken Detzner, continuing to say “the overall cultural, historical and tourism benefit is exceptional.”

In Good Hands
With excellent safety standards and an experienced staff behind the operation, DYT's Super Servant 4 will complete the delivery of NAO Victoria from Palma de Mallorca to Port Everglades, Fla by mid December.

More about DYT Yacht Transport
DYT Yacht Transport (DYT), headquartered in Fort Lauderdale, Florida (US), specializes in the maritime transport of private luxury yachts. DYT utilizes semi-submersible dock bays that allow yachts of any size to be safely and easily floated on and off as cargo, making it a leading provider of yacht transportation on a regular liner service.  Since its maiden voyage in 1987, the company has transported over 12,000 motor and sailing yachts to various destinations around the globe, offering owners and charterers safe and easy access to many of the world’s premier cruising grounds. Along with area representitives around the globe, DYT has additional operating offices in Italy, Martinique and Newport (R.I.).