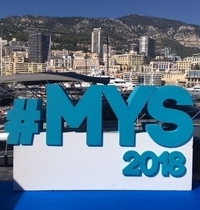 The 2018 edition of the Monaco Yacht Show concluded last week. It was, by all accounts, the most upbeat show in a decade.

Raphael Sauleau, CEO of the full-service yacht brokerage and management firm Fraser, exclaimed that the company had the most successful year on record, with 78 yacht sales. Our contacts in the industry have suggested that the US high-net-worth economy, which has had a lift from President Trump’s tax breaks, is the source of some of this increased activity.

With more deals signed and a sense of increased market activity afoot, the docks of Monaco were teeming with positive vibes. “It’s good business this year; not just for us, but for the whole industry,” said Mario Giornati of leading Italian yachtbuilder Sanlorenzo, who are on a bit of a high with some conspicuous sales and their new yacht designs getting favourable reviews. The Amels-Damen powerhouse was in evidence again this year with their latest Yacht Support vessel Power Play on show and recent announcement of new build deals. Dutch master sailboat builders Royal Huisman revealed the PURA concept that offers clients a customizable platform that should lure buyers with its brilliant flexibility and top-shelf engineering.

Blue-Green initiatives were big on the agenda again this year. We expect this show, along with the Marine Equipment Trade Show in Amsterdam to increase its showcasing of environmentally-tuned technologies as part of a wider global effort to protect the oceans and reduce pollution. Viareggio Super Yachts signed a deal with Siemens and Lloyds Register to develop hydrogen fuel cell technology for a special version of the new VSY 65m Waterecho project designed by Espen Øino. Hydrogen Cell tech has been kicked around in superyacht tech meetings for ages, so this represents a very visible step towards a real application.

“Superyachts can support innovation because some owners are willing to invest to have cutting edge technology on board,” said Roger Horner, CEO of e3 Systems. E3 has the worldwide maritime distribution rights for the Kymeta flat-panel satellite antenna, a mobile comms solution backed by Microsoft founder Bill Gates.

Saudi Arabia is building a maritime resort on the Red Sea, part of a wider series of projects spearheaded by Crown Prince Mohammed bin Salman to ease restrictions and open the Saudi economy to tourism. Yachts don’t love the Arabian peninsula yet; its warm waters give the HVAC systems a run for their money and sandstorms are a nightmare. The initiative is backed by one of the richest sovereign wealth funds in the world and a Crown Prince with a clear agenda. We learned at MYS that a partnership with Prince Albert II of Monaco Foundation on marine conservation means the huge reef-system the resort will be built upon should get the best possible protection (other than simply leaving it alone, of course). Over on Quai Albert, there were a couple of fanatically blue Lamborghinis; a power boat and a car. All that visual attention may have distracted from Aston Martin’s presence at the show in the form of their AM-37 speedboat and the Triton sub concept that at least one owner’s rep we were with immediately loved.

And it was fantastic to see Pendennis celebrate 30 years of building the finest yachts, an occasion that was marked with the presence at the show of their new build sailing yacht Vijonara and a Red Arrows flyby display over the port on Thursday. As ever, in the cool rooms at the back of the stands and overlooking the port aboard a showboat, there was chatter and gossip, positioning and intrigue. It’s a market run by humans after all.

“There were lots of deals being done this year,” said Benjamin Maltby of Keystone Law. “I was pleased to be helping get so many of them over the line, even during the show. But I was also hearing of increased tensions and disputes brewing between rival suppliers and service providers. This isn’t helped by shipping lawyers dabbling in yachting and failing to understand the industry culture. A lawyer’s job is to rescue and restore commercial relations - not encourage entrenchment and litigation.” Rob van Tol, who has taken on the running of The Superyacht Life Foundation alongside his ongoing role with Theo Hooning at SYBAss, is engaged in a campaign to promote a more approachable vision for the superyacht lifestyle, a project we heartily endorse.

Another of the buzzworthy announcements at the show was the launch of Superyacht TV, with Chris Moore teaming up with Patrick Coote to produce and distribute superyacht content. Superyacht Radio - an OnboardOnline content partner - was also there, broadcasting every day.

We also announced our own new content partnership with The Islander based in Palma, which will bring some of our content to the pages of the beloved print magazine, and some of their excellent content to our digital readers.