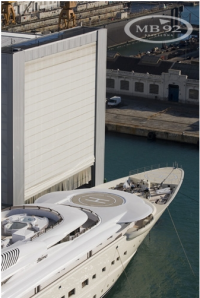 The Barcelona refit shipyard Marina Barcelona 92 (MB‘92), one of the world’s largest maintenance facilities for luxury yachts up to 220m announced today that D-Marin Investments Holding, a subsidiary of the Turkey-based Doğuş Group hastaken a 70 per cent stake in the business.

The investment, which values MB’92 at €80 million, has been secured to develop increased international presence in both the Mediterranean and across the Atlantic, as well as to fund internal projects, including the installation of a second shiplift.

MB’92’s current management team retains a 30% interest and will continueto control daily operations of the shipyard. The shipyard, whose footprint includes a land area of 76,000m2 and 40,000m2 of water surface in the Port of Barcelona, is one of the most important of its kind in the Mediterranean.

MB’92 renewed its concession in the port facilities of Barcelona in 2010 for 30 years. The new investment will enable management to proceed withplans to install a new shiplift (a lifting platform that moves vessels between thewater and a working area in the yard) with a capacity to haul out yachts up to 4,000tons, which will be operational in 2017.

2010-2012: The first expansion phase consisted in acquiring and renovating oldfacilities belonging to the commercial yard Union Naval de Barcelona (UNB). The remodeling and adaptation of historic buildings into workshops, the adaptationof docks, removal of a floating dock and the works done in the additional largehangar acquired are some of the refurbishing that has taken place. A total of 35 million Euros was invested to complete and start running the new docking area.

2015-2017: The second phase of expansion has recently begun with the construction and installation of a new Shiplift with double the lifting capacity of thecurrent one: 4,000 tons. The investment in this project is approximately 40 million Euros.