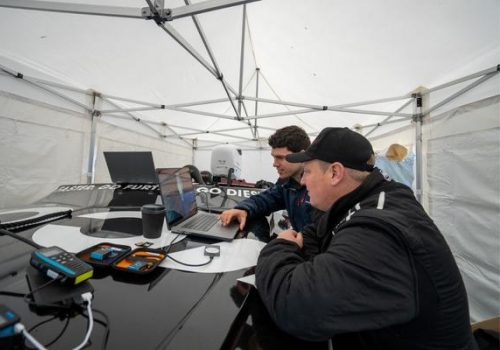 Published data from COX Marine’s record-breaking Project Pegasus at Coniston Records Week have revealed that running the boat on HVO fuel offers a staggering net CO2 saving over a comparable petrol outboard of 94 per cent.

The COX Marine team and its vessel Pegasus, hit the news earlier this month by clinching a coveted World Record title, for World’s fastest Diesel outboard*. The team beat its own records three times throughout the week achieving a final average speed of 62.84mph, measured across the kilometre-long flying start course on Cumbria’s Coniston Water.

The laudable achievement of this inaugural diesel outboard motor speed record was only one of the project aims. “Of course the whole team are justifiably delighted with 62.84mph from a totally standard CXO300 pulled straight of the production line, but the real message is what the achievement says about HVO, other ‘future fuels’ and the clear benefits they can bring,” says James Eatwell, COX Marine’s Head of R&D.  “Every second the motor ran on Coniston, from early shake down runs and prop and trim optimisation runs, to final record runs was data recorded.

“We ran the engine on both HVO and diesel during the week, and it's important to state that in terms of the engine’s vital statistics, including, oil and water temperatures, vibration, and of course RPM and top speeds achieved, the data showed comparable results between the HVO and marine diesel. In emissions testing prior to Coniston we actually saw a 40 per cent reduction in particulate matter emissions in running a CXO300 on HVO instead of diesel, tying in accurately with claims made by our HVO fuel provider and suggesting more complete combustion was being achieved with the HVO.”

This is an important first point to make about HVO; it is a true ‘drop in replacement’ for conventional diesel. Tanks and fuel lines need not be cleaned when changing between the two fuels, and the CXO300’s ECUs (Electronic Control Units) will automatically reset and optimise the engine for the fuel in use, whether HVO or diesel just as they also do for the slightly different grades of diesel available around the world.

A speed record provided the perfect backdrop to illustrate this.

“We wanted to demonstrate that power and performance indistinguishable from fossil fuels can still be achieved without damaging our environment,” continued James. “It’s one of the founding principles of Cox Marine and continues to drive our pursuit of innovation through technology today. We couldn’t think of a better forum in which to emphasis this, than vying for a World Speed Record and simultaneously debuting the CXO300 use of HVO fuel. 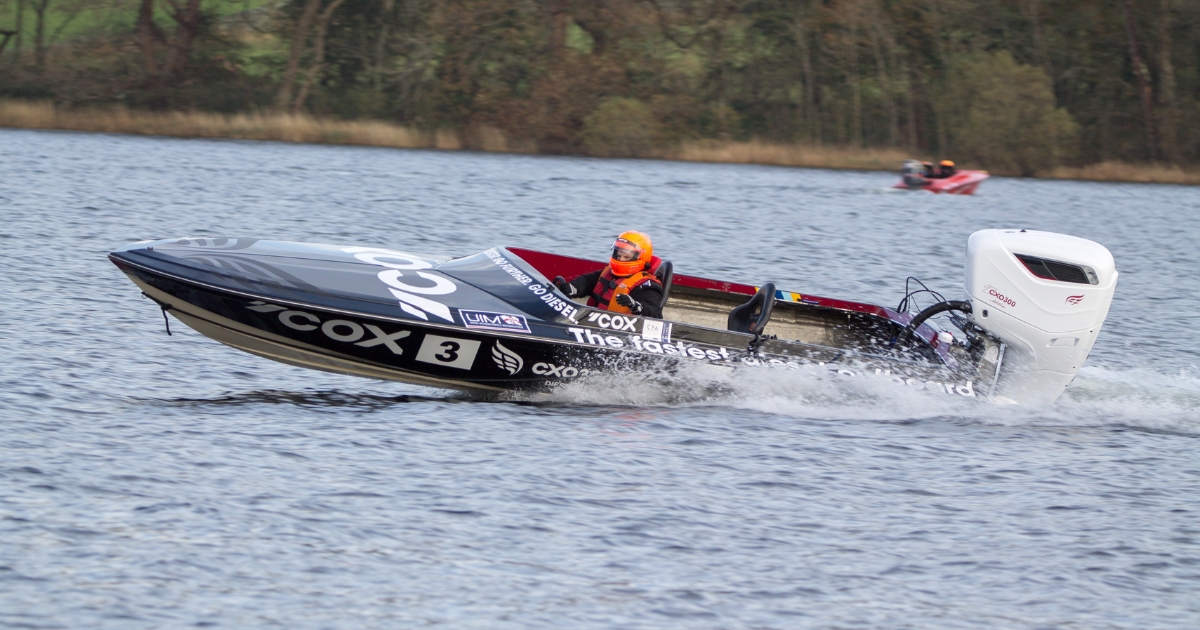 “We have established that a modern engine like the CXO300 will not ‘notice the difference’ between HVO and fossil diesel, and ‘tailpipe emissions’ will also be significantly reduced by using HVO, but the real benefits lie in the net CO2 emissions; a figure which also takes into consideration the balance of CO2 used or released during the production or refining of comparative fuels.

“Because HVO is synthesised from renewable waste materials such as used cooking oil, tall oil by-products, non-food grade crop-based vegetable oil fractions, and residue fat fractions it has taken CO2 out of the environment for its production. Burning it in an engine then puts this previously removed CO2 back into the environment. Fossil fuel derived diesel by comparison, in effect takes CO2 that was locked away as oil in the earth’s crust, which when combusted in an engine, releases this ‘new’ or additional CO2 into the atmosphere. For the Pegasus runs on Coniston Water we worked out that for the total 80 miles travelled on the lake during the week, Pegasus was releasing 90 per cent less net CO2 running on HVO over standard marine diesel. Diesel outboard propulsion already provides a net, and tailpipe CO2 emissions advantage over comparable petrol outboards, simply by burning significantly less fuel, so out of interest we also ran the numbers for a petrol outboard. The 300hp V8 four stroke petrol outboard chosen for comparison would have produced 60% more CO2 to the atmosphere than the diesel fuelled CXO300 as ‘tailpipe emissions’ and opting for a HVO fuelled diesel outboard over a petrol equivalent would achieve a 94 per cent net CO2 emissions reduction.”

A compelling argument for diesel outboard propulsion before you even begin to consider matters such as the increased torque of a CXO300 over a petrol 300hp engine, offering significant improvements in dynamic capabilities. Single fuel policies, the superior availability of waterside diesel supplies and greener diesel substitutes worldwide and the much better vessel range offered by diesel propulsion are other factors in the CXO300’s favour. In addition, HVO is nearly completely biodegradable unlike petrol and fossil diesel, so in the marine environment, in the event of a fuel spill it is considerably less damaging. Compared with petrol, the considerably lower flammability of any form of diesel, including HVO, over petrol make diesel outboards a much safer proposition too.

HVO is only one step in the marine decarbonization journey though, James is quick to point out: “As far as operating diesel engines on ‘future fuels’ is concerned, HVO is not the only game in town, and while we ran on HVO100 fuel at Coniston, the event also provided the opportunity to point out to our customers and prospective customers the fact that the COX CXO300 offers the widest range of fuel types approved for use on any diesel outboard.”

Great news for existing Cox Marine customers and prospective new ones, is that the Coniston debut, will mark the company’s official support of HVO fuel use in its outboards without impacting warrantees, service schedules or requiring any modification to the engine.