A Milestone Anniversary for Peters & May Yacht Racing Director 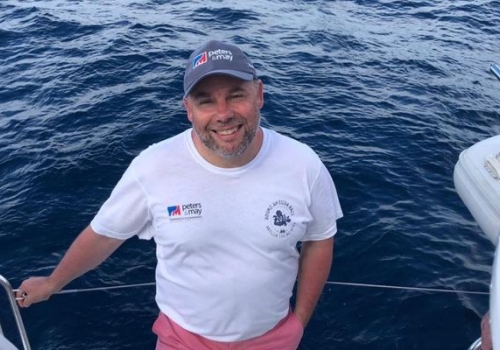 Peters & May Global Director of Operations for Racing, Craig Stanbury is celebrating a momentous twenty-year anniversary with the global marine transport and logistics provider this month. Well-regarded within the world’s yacht racing and leisure yachting circuits, Stanbury first joined the company in 2002 as an experienced freight forwarding professional and successfully climbed through the ranks to his current position, where he heads up Peters & May’s Racing division.

Stanbury’s career with Peters & May began as a freight forwarder for the company’s general import division in Eastleigh but his love of yachts and previous shipping experience soon earned him a transfer in 2003 to the company’s marine division in Southampton under the then Managing Director, Gerald Price.

Like his father before him, who was employed at Peters & May’s air-freight division at that time, Stanbury’s roots in shipping and freight forwarding in his native Newcastle-upon-Tyne, helped propel his career in marine logistics, progressing to racing logistics soon afterwards. It was during this time that Stanbury used his effortless flair for forging loyal relationships with wide-ranging contacts in the yacht racing circuits and leisure yachting sector. As a result, Stanbury has become one of the most trusted and well-regarded professionals in this sector. His passion for the job, ability to get things done and willingness to ‘move mountains’ in the most challenging of circumstances has been pivotal in achieving this.

Stanbury has witnessed a vast number of changes in marine logistics over the many years that he has worked for Peters & May and has faced ever evolving challenges. “In the early days, when I was involved in the logistics for high-profile campaigns such as the Whitbread Round the World Race, and subsequently the Volvo Ocean Race, and technology wasn’t as sophisticated as it is today, shipping a new keel for a yacht that had run in to trouble in remote seas is a good example of one of the many challenges we faced back then.”

“Although technology and communications have moved on vastly, we are now faced with new, and I would say even tougher challenges such as the recent COVID pandemic and current Ukraine war, which have had an incredible impact on the industry globally, creating shipping backlogs, staff shortages and price increases.”

There have however been many highlights in Stanbury’s yacht logistics career, which he says are too many to name having been involved in some exceptionally high-profile yacht movements. One that does particularly stand-out is the repatriation of Tracey Edwards’ world-famous 58ft Farr racing yacht Maiden from the Seychelles. Four years on and fully restored, Stanbury and his team were once again trusted to ship Maiden to Dubai last October for a three-year world tour to help promote

Edwards’ charity, The Maiden Factor, which was set up to help raise funds for 12 years of quality education for every one of the 130 million girls in the world who currently have no access to education.

“Huge congratulations to Craig on his 20th anniversary. He is an extremely valued member of our team,” comments Peters & May CEO, Simon Judson. “His passion for what we do and his drive to deliver the highest level of service for our customers, always going beyond, is an inspiration to all of us. His colleagues have undoubtedly gained from his expertise over the many years that he has been with the company.” Customer service remains at the forefront of everything Stanbury and his team do, and it is their dedication and passion in delivering this that persuades racing customers to return to Peters & May, time and time again.

When asked what he enjoys most about his job, Stanbury simply says, “Every day is different. The job is never boring!”