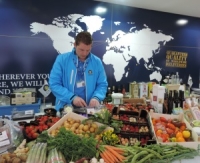 In last month’s feature, yacht provisoners shared their stories about wacky requests, such as provisioning live crickets to feed a yacht’s iguana and supplying haute couture.  The stories don't stop there though- who would have thought provisioners delivered hay to yachts, or were asked to source unborn lambs?

Also this month: do you think yacht crew work the hardest of anyone in the industry?  Read on: you might be surprised.

Over time, all provisioners become accustomed to the pressure, strange requests and moving destinations of the yachts they supply. In fact, all provisioners contacted for this piece replied that the wildly changing demands are completely normal, after a while.

You might then think that it would become routine: the same year in, year out.  But that wouldn’t account for fads, and fads in the yachting business are legendary.

As Helen from Delicioso in Palma tells me, food trends keep them on their toes. “One chef wanted hay delivered because he was going to smoke something- at the moment smoking food is very back in fashion, so we’re getting lots of smoking guns and hay, things like that. We get various unusual and weird requests like that- our orders often follow food trends really- and often what we see each year changes, so when we upgrade our provisioning lists it encompasses many of the things we were asked for the year before."

Helen also stressed that “It’s not so much the weird and wonderful requests that are hard to source-after all, we can always track things down and source things- but it is the the short lead times we often get that can be difficult."

“Highly specialised meats can be difficult to source- the best prime beef from the US can have quite a lead time on it, and tracking down special vintages of champagne can also be really tricky.  72 bottles of a particular vintage?  No one supplier would have all of that of one vintage sitting in stock.  It’s often that we would use 10 suppliers to fill just one vintage of one particular wine."

A Drop To Drink

Sourcing rare wine is something that Rod Smith from VSF (Vins Sans Frontiers) knows a great deal about. He tells me, “In wine terms our wackiest request was the guy who tried a very expensive rare wine in a restaurant in Moscow. We couldn’t find it on the open market so we phoned the winery but they didn’t have any and the only place in the world that had it for sale was the restaurant. We arranged for him to buy it, at Moscow restaurant prices, and he sent his plane to collect it. It was a Montrachet from a small producer. Discovering how hard it was to track down made it even more desirable; it became beyond price. We made nothing apart from the goodwill.”

This ‘goodwill’ aspect of provisioning is not well known, but several provisioners mentioned that on certain rare or expensive items, the best case scenario is for the company to break even on the delivery.  Rather than profit on these occasions it is instead about fostering the company’s reputation for being able to source any item.

It’s not all stress and profit margins, of course; there are also perks to having a strong relationship between boat and provisioner.

Rod mentions a case where he was called in to rescue the world’s most expensive wine from an ignominious end, much to his delight.

“The most unusual phone call we ever had was from an owner who didn’t finish a bottle of Romanée-Conti Grand Cru 1990. The crew weren’t allowed to drink on duty. The stewardess phoned us and said ‘If you’d like to come and get it, you’re very welcome to take it away’. It would have ended up being thrown away.

He was on his own - his family had gone back - and he was moored in Antibes so every day for a week he let us take back the unfinished bottle. One was worth €13,000, it was our most expensive wine, and we got enough back that everyone was able to try it which is not something that many people get to try. It was very generous; he would rather it went somewhere other than down the sink. Domaine de la Romanée-Conti is the most expensive and famous wine estate on earth, it’s a small one in Burgundy and is regarded as the top.”

An Elephant By Any Other Name

Special occasions also provide challenges for Provisioners, as Caterina from Everything Marine knows.

"There was one romantic provisioning request we had for an owner's wife's birthday, she explains. "She really loved two things: roses and elephants, so the owner wanted to impress her by having something organised in this theme.  We managed to have a florist and four assistants board the yacht quietly at 2am, to have something like 30 000 roses laid all around the vessel.  The yacht was completely covered with roses, and a path was built from the owner's wife's cabin to the upper deck breakfast table, where an elephant made of roses sat waiting for her awakening."

For another event, Shore Solutions was asked to provide three-tiered wedding cakes for a three year old child’s birthday party, which had to be delivered to a yacht by tender in force 5 winds.  Not just one cake either;  the cakes had to be delivered for several days in a row in case the child wanted to change the day of her party.  Shore Solutions were also asked to provide 20 palm trees and three tonnes of sand to decorate the boat for the party, which, incidentally, never happened. (Read more here)

Provisioning in regions like the Med and the Americas is one thing, but as yachts increasingly visit countries with less yachting exposure and infrastructure, the challenges of global provisioning grow.

Joost van Gorsel, Manager of NeKo Yacht Supply describes a case where the remote location of the yacht provided some obstacles.

“Our toughest challenge was a delivery in Salalah in Oman.

"The owner came on board at short notice and the chef called me for six pallets of fresh provisions. We had to fly it from London to Muscat to the desert and then transport it 11 hours by road to Salalah because the planes from Muscat don’t take any cargo there. It was a bit tricky, the agent said it wasn’t allowed but once the owner stepped in and said ‘It’s for me’, all the doors were opened!” Despite all provisioners’ can-do attitude, there are also rare occasions where a request for certain items cannot be filled for certain legal or even moral reasons.  As Joost explains,

“We can source almost anything but we had a request from one of our owners for unborn lambs! He wanted them for rack of lamb but our butcher in the UK said he couldn’t do it. No farmer would want to do that so we didn’t fulfil the request.”

This relationship between supplier and provisioner has to be very tight, and some companies such as Neko involve the suppliers directly in the process, which keeps costs down and puts yacht chefs in touch with the people who know the most about the product. Joost explains this method, saying

“…We have our specialists - butchers, fishmongers and grocers - to give them a call and customise their needs. They find out what the chef wants, they pack it and we do the rest. It’s a new concept, we have been doing it for seven years, but we want to grow slowly so we can guarantee the quality. Price is also very important these days, so we can keep that lower by dealing direct with the supplier. We are the perfect partner for supplying quality products.” Hours of Rest? For Provisioners? Don't be Daft.

Yacht crew tend to think that they work the longest hours, and as ex-crew, I never doubted that for a second.  However, it doesn’t take long in the company of provisioners to realise that during the season, 18 hour days are commonplace ashore as well- and there is no such thing of Hours of Rest for the supporting industry.

Whether global or local, all of the provisioners I spoke to talked of 24 hour operations, 5am starts in the marketplaces and getting home long after dinnertime to face hours at the computer. Getting up in the night to go to the bathroom, checking their phones with bleary eyes and finding themselves instantly back at work.

Gabi from Gourmet Deliveries explains, “In summer our warehouse never closes, the boys do the fruit and veg during the night- they go out buying from producers, they start at 10pm…In summer we just don’t close. It just doesn’t stop- and you don’t say no to a client- you don’t get to say, ‘no, I’m not coming to deliver your order because I have two days off. It just doesn’t work like that! As Ian Jarvis rom Superyacht Supplies points out, “We’re all in this industry together- it’s not a 9-5 business- not for anyone, unfortunately.  The crew work hard onboard and our team work long hours- 5am until long into the night to get the product for them. We go the extra mile, as larger players in a global market.”

Some provisioners have a yacht crew background, such as Alessia and Marin Cortesi from Yacht Gourmet Supplies, who provision along the Adriatic Coast. With 20 years combined experience as yacht chef and engineer, they have a real understanding of the pressure yacht crews face during the season.

Damien from SOS Riviera agrees that life on board isn't easy.

So next time an order turns up on the dock, in chilled Styrofoam boxes and padded crates from all corners of the earth, maybe we can stop for a moment and be grateful, rather than think- damn- I hate deliveries- how do they always turn up at lunchtime?