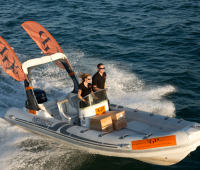 Imagine this. In a bay in Alaska, a superyacht sits rocking gently at anchor. A man in an expensive bathrobe is at the breakfast table, reading the paper.

He looks up and calls over the stewardess to inform her that he wants Alaskan King Crab for dinner.

‘Well we’re in Alaska, that can’t be too difficult’, thinks the stewardess, and trots off to the galley to tell the chef, who promptly blows a gasket and chops her into tiny pieces.  I’m being unrealistic, of course. He would call the yacht provisioner first, and then chop her into tiny pieces.

Sometimes, even the seemingly simple requests can pose a challenge in the yacht provisioning business.  As Andrew Roch, owner of global provisioner Shore Solutions explains,

'Well where does King Crab come from? They’re from Alaska, where they’ve been fished and go through a processing plant before being exported to Europe. That is the insanity of what we do. It’s easier to buy it from us than it is to find a local Alaskan crab fisherman, who is only allowed to crab out of season, cannot sell it on and just has a quota for his own use."

When a yacht chef or steward/ess places an order, no matter how simple it may seem, it sets a chain of events and people in motion.

Sourcing, logistics, packaging, customs, timing, destination- all of which can change in the time it takes for the owner to put down his newspaper, decide he no longer likes crab- or Alaska- and set his course for Hawaii instead, where he is overcome by a hankering for yak's milk.

Then there are the not-so simple requests, of which there is a delightful abundance.  Of course, it’s not always food and wine that appear on the strange order books of superyachts. Everything Marine, who supply yachts in Venice and along the Adriatic Coast, tells a story of sourcing ten boxes of live crickets for a yacht owner’s pet iguana, only for the captain to delay the delivery because the owner was on deck, meaning the tender and its chirping cargo could not approach.

As Caterina tells me, “We ended up keeping them in the office singing for many hours, as suddenly the owner changed his mind and wanted to leave immediately for Croatia.  Luckily in this industry, most clients are friends, so another yacht that was leaving for Croatia took the crickets along with them and the crickets ended up on the right vessel.”

What do embroidered pirate flags, toasters, pool noodles, outdoor settees and the DVD ‘Eyes Wide Shut’ have in common?  They’re all things ordered through EGP, a provisioner supplying yachts in the Mediterranean.  As Pamela explains though, ‘All these things are easy to find when given enough notice.  I think the real challenges are the last-minute ones. When a stewardess calls and says ‘we are at anchor- and we need gluten free bread to serve right now!’'Or we get a call that says, ‘I need 300 bottles of Ruinart Champagne- tomorrow!’

Hard to pop to the corner store and pick them up, but in one day we set up the express transport  from Champagne to Cannes, and the order was delivered on time, along with 300 bottles of wine, 50 bottles of spirits, many kilos of meats, fish and vegetables.’

One Must Dress For Dinner

Shore Solutions has filled all manner of bizarre yacht orders in its decade of operation. As Andrew tells me in our interview (read full transcript here),

"In terms of quirkiness and infinite luxury, the perfect example would be when we were asked (for a 100+ metre boat on build) to provide 4,500 bottles of perfume for the boat.  There were 200 brands of perfume for each cabin and its perfume cabinet.  We were then asked to supply haute couture dresses for every cabin on board. There were to be a dozen dresses in each cabin, two from six pre-picked designers. It was all so that whoever came to stay on board was suitably attired and scented – along with all the other accompaniments, in terms of hair products, toiletries, handbags etc.

Now that’s going to the extreme. There were 22 guests on board for one owner and each one of those guests needed to be dressed immaculately.

Whether they could bring their own clothes or not was not really of interest to the owner, he just wanted them dressed in line with the luxury of his boat. Both male and female, I may add!"

Speaking to provisioners and hearing stories like these, you quickly realise they're a positive bunch.  This niche yet global supporting industry requires a can-do attitude: anything less would result in failure.  Just as yacht owners don't like to hear the word ‘no’, yacht provisioners are unlikely to say it.

Challenges are common but almost always surmountable, as Ian Jarvis of Superyacht Supplies points out.  “Of course there are challenges, this industry produces new challenges every day. But over the 11 years, what were unusual requests at the beginning have now become routine and we enjoy the challenge.”

Every provisioner contacted for this article was quick to point out that, rather than the items themselves, it is time constraints that prove the most difficult.  As Jarvis says,

“Yesterday is almost the standard - that’s the nature of the industry.  It’s not inefficiency on the part of the chef or chief stewardess- after all, they cannot react to something they don’t know yet."

When asked if he ever turns away business as being impossible, Roch from Shore Solutions answers quickly, “No, not really, nothing’s really impossible…If you call us with a vast order, I can put a team in place straight way with 3, 5, 8 trucks to facilitate that order.  I mean we had an order the other day for just under 12 tonnes to Venice and we had to hire a barge with a crane. We did it within the time frame, within the legalities of transporting goods through the canals, and it was a very successful delivery. And we jump when we’re asked to jump, no matter how high and how tight the hoop is we will get through it. “

Sorry Mr President, the Crustaceans are Mine

In order to maintain this 'can-do' reputation, provisioning companies must build and nurture relationships with the best suppliers.

As Jarvis points out, this often requires an education process at the beginning. When he moved into superyacht supply from the wholesale food industry, he explains, “Initially we had to educate our high-end suppliers with regard to the special demands of the yachting industry, where packing and delivery specifications are different to those of a restaurant, such as the need for vacuum packing of meat and fish in pack sizes to meet a yacht chef’s requirement."

This close working relationship pays off, in a market where there is often competition for premium produce.

At Laurent Castel/Fine Yacht Provisions, as they’ve grown from a tiny seafood shopfront to a large specialist supplier, their good reputation is not just with their clients but their suppliers too, often giving them priority over their products. “There was an occasion where the President of France placed an order at the same time as us for 200 large langoustine; our supplier sent us the langoustine and the chef of the president was left to find an alternative dish to serve at the Presidential Banquet.”

They also have to court the chefs, proving their produce is the best. To that end, Laurent Castel invites yacht chefs to come and visit their premises, where they have smoking and flash-freezing capabilities on-site.


Provisioning as an Olympic Sport

Yet even once the best product is sourced, that is only the first step of this 'amazing race'. As Jarvis tells us,

“Finding the right produce and ingredients is only part of the challenge - getting it to the client - where they want it, when they want it, the timing, packaging, international shipping and export approval is all part of the service. Having a wide knowledge of logisitics in key, knowing which is the best and most competitive routing and being transparent on what can and cannot be done is important. “

Damian from Riviera SOS thinks food provisioning should qualify as an Olympic sport, and job interviews for his company take place at local supermarkets, where he gives the candidate a list and sets them off on a ‘Supermarket Sweep' like challenge. He says that waking up at dawn during the season seems a bit like the TV show The Apprentice.

"As you start the day, you have your six tasks (deliveries), but the tasks keep changing. That doesn’t happen when Alan Sugar does it, or when Donald Trump does it in America. 7am deliveries change to 3pm, then instead of being in St Tropez it’s now in Genoa, the San Remo delivery moves to Monaco, another delivery gets cancelled all together, or they want it tomorrow morning instead. We were going to deliver in port and now we’re delivering to tender, the delivery was going to take 10 minutes and now we’re waiting up to two hours for the pick up which has a knock on effect, of course. In reality, the Apprentice is for amateurs. “

“It’s just an ever changing landscape and all the while the phone is ringing, emails arriving with next day orders and todays add-ons, even whats app messages and viber texts. That’s the challenge. Maybe I’ll quit one day and take a much easier role...possibly as European President... "

Read part II next month where we continue with:
"Change is the only constant... An elephant by any other name and... Hours of rest for provisioners? Don't be daft!"