Industry » Features » The Upside of Superyachts
« BACK

The Upside of Superyachts 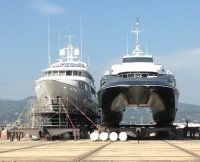 It’s easy to resent the superyacht set. With the recent launch of motor yacht AZZAM (180m/ 590.6 feet) overtaking Roman Abramovich’s ECLIPSE (162.50m/533.1 feet) to become the world’s largest private yacht, it’s tempting to grumble into our cornflakes about excess and waste. Owned by the President of the UAE, Sheik Khalifa bin Zayed al-Nayan, and costing 400 million pounds, this enormous yacht was built essentially so a man could take a nice holiday.

In times of austerity, this kind of behaviour can rankle, and one could dismiss the whole superyacht industry as frivolous – even scandalously so.  But there’s a serious upside to this lavish spending that’s often overlooked. It’s easy to understand why yachting comes in for bad PR, and it’s a subject that has brought the whole industry together in an attempt to re-brand and re-shape attitudes. The most compelling message is that superyachts pump billions of dollars into the global economy and create hundreds of thousands of jobs worldwide.

In a recent interview with OnboardOnline, Ken Hickling, President of the International Superyacht Society (ISS) had some strong words about the public perception of what the ultra-rich should do with their money.

He refutes the argument that billionaires should give all their money to charity, saying, “Why should they? The very people who are reading this don’t give all their money to charity either.”  And when compared to other luxury purchases, such as art collections and jewellery, “How many jobs are created for each million spent? The superyacht beats all of them hands-down. It’s the most work-intensive because it’s a craftsman’s industry...So for a 65m superyacht, you have 2,450 people who are putting their kids through college, or paying off their mortgage, or doing all the things that regular people do. Because it is bluecollar and whitecollar workers who build superyachts. It’s not the wealthy who get wealthy from superyachts. It’s people like you and me.” According to Hickling it’s a vital driver of the wider economy, “That’s the thing the industry needs to project. That, aside from charitable giving, superyachts are the most effective way to extract money from offshore funds where the wealthy keep their money and put them into the wages of regular people.”

The yachting industry directly employs hundreds of thousands of people, as crew, as well as the global army of skilled workers that design, build and maintain these floating mansions.  When you add in the services for training, management, legal and finance, ports and security, you begin to get a picture of wealth distribution at work.  Factor in the countless provisioners that supply food, wine, linens and cleaning products, and you realise this industry is a colossus, and its money trail stretches across the globe.

Yet the superyacht industry has not been immune in times of crisis. According to the Camper & Nicholsons report, in 2012 sales of new yachts stood at £2.13 billion (3.4 billion US dollars) down from a peak of £3.38 billion (5.4 billion US dollars) in 2008.  At the height of the crisis as many as 36% of all superyachts were up for sale; crew were sacked, businesses closed and shipyards shut down forever. Salaries were forced down and small island nations lost their entire tourism. Rich people not buying yachts has global ramifications.

Luckily the super-rich continue to spend even in the current climate, but the report demonstrates a growing shift in economic dominance away from the West. While Americans still top the table for the number of new orders, according to the report, “ the largest yachts are owned by owners from the United Arab Emirates with an average length of 60.64m (199 feet), followed by Russia with an average length of 57.74m (190 feet).

The emerging nations are increasingly major players in the yachting stakes- Turkey ranked third for new yacht sales after the US and Russia, while Hong Kong, China and Brazil also now feature in the top ten.

The keenly anticipated growth in Chinese sales has been slower than expected, and there are cultural reasons to explain this. As the report concludes, “Latin America, in particular, is a promising new market as its citizens are culturally more inclined towards the sun and yachting than the Chinese.” Consensus among experts is that growth in China hinges on exposure, beginning with an increase in charters and the purchase of smaller yachts.

There are now signs that the tide is turning. Back in June this year, China's Dalian Wanda paid £320m for almost 92% of Sunseeker International, followed last month by the announcement of Sunseeker's new offices in China, widely seen as positive steps towards a boom on the horizon.

China's rapid economic growth has produced a surge in the number of high net worth individuals and after featuring in four James Bond films and numerous paparazzi photos, it is no surprise that the brand is appealing to a country with no shortage of multi-millionaires.

For those of us working in the yachting industry, this is great news. For others, the closest many will get to a superyacht is by visiting one of the boat shows or regattas to catch a glimpse of the world’s most spectacular yachts with their cutting-edge technology and splendour on display. It’s a spectacle and, whatever your view, it’s difficult not to be impressed by these magnificent vessels. Ownership will always be a luxury for the very few, but the day the super-rich stop buying boats we are all in trouble.