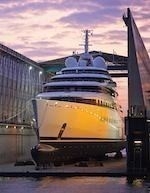 NICE, FRANCE – The royal family of the United Arab Emirates has dethroned Russian billionaire Roman Abramovich in the race to own the world’s biggest mega-yacht, an annual survey of the world’s 100 biggest yachts has shown in the magazine Yachts France.

The 180-meter Azzam built for Sheikh Khalifa bin Zayed, president of the United Arab Emirates and emir of Abu Dhabi, has ousted Abramovich’s 163.5-meter Eclipse from the top of the yacht league table, the magazine reported in its survey.

After holding the top spot for three years, the Eclipse was pushed into second place by the Azzam after its delivery this year by German builder Lurssen Yachts. The floating palace features six bridges and a 550-sq.-meter lounge decorated in the opulent turn-of-the-century Empire style, the magazine reported.

Despite its size, the behemoth can also move at a top speed of 31.5 knots (58 kph), making it the third-fastest yacht among the top 100 listed.

The magazine did not divulge the vessel’s price but previous media reports suggested the Azzam cost between $400 million and $600 million to build.

Of the 100 top yachts profiled by the magazine, 31 had Middle East owners, while 19 belonged to Russians and 17 to Americans. Among this year’s eight new entries to the top 100 was Steve Jobs’ Venus, a Philippe Starck-designed 78-meter superyacht ordered by the Apple Inc. co-founder before his 2011 death. It ranked 88th.

The Dutch-built yacht, which features a control panel with an array of iMac computers, was only allowed to leave Amsterdam in December after Jobs’s estate paid a deposit to resolve a dispute with Starck over payment for the design.

The top-ranked U.S. yacht on the list was the 138-meter Rising Sun, owned by music and film magnate David Geffen, in 10th place. Director Steven Spielberg’s 85-meter Seven Seas was 54th on the list.

The biggest British-owned yacht was the 91-meter Nahlin, belonging to inventor and entrepreneur James Dyson, which ranked 36th.