Industry » Features » The Charitable Side of Yachting
« BACK

The Charitable Side of Yachting 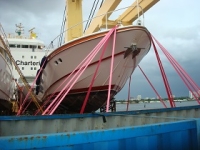 What does the word yachting mean to you? Do you think first of the highly polished, sexy superyachts moored in St Barts…or perhaps the competitive and dynamic classic sailing circuit which dominates spring and summer in the Western Med?

Either way, it’s not too much of a gamble to assume you probably don’t think charitable thoughts. Yet behind the scenes, many of the industry’s leading names are working diligently to make a difference through quirky initiatives which raise not only funds for great causes but also awareness about the joys of life on the ocean wave. A donation of £5 per strap is charged to the owner and Peters & May has been matching the sum. With an 80 ft yacht requiring around 50 lashings, the funds have been rolling in to help propel the company towards their target of £25,000. Each boat owner who takes part receives a photograph of the loading and a thank you letter from the charity.

‘We have had a very positive reaction from owners, everyone thinks it’s a great idea,’ says Peters & May’s Joshua Flavell. ‘A number of customers have booked for shipping with pink lashings and we want to raise as much awareness and funding as we can through this and other initiatives. We also held a clay pigeon shoot, auction and dinner last year which raised over £10,000 for BCCT.’

Dave Holley, CEO of Peters & May, said: ‘Breast Cancer Clinical Trials is a charity close to many people’s hearts, especially mine, having lost my mother to this terrible disease. The work they carry out has already led to some great achievements in this field. We are excited to have come up with this innovative new idea and are confident that our clients will appreciate this opportunity to donate to such a great cause.’ BCCT spokeswoman Victoria Gerlis added: ‘BCCT are delighted that Peters & May have chosen to support our charity with this initiative. The use of the charity’s colour for the lashing straps will help to raise awareness and the donations will help us to continue to make a difference.’

Continuing the pink breast cancer theme, Williams Performance Tenders came up with a very special Turbojet 325 tender in the famous hue as part of Breast Cancer Care’s Fab1 Million campaign. Launched at last year’s London Boat Show by broadcaster Suzi Perry and put up for auction throughout the duration of the event, the bespoke craft was eventually sold for £18,000 to John Chartres.

The Fab1 Million project centres on the famous pink Rolls Royce Ghost - which is available for hire at £2,500 a day with a chauffeur - and hopes to raise £1million in total for Breast Cancer Care, which is the only specialist breast cancer support charity working throughout the UK.

Mathew Hornsby, sales director at the Oxfordshire based company, said: ‘Not only is it stunning to look at but our pink Turbojet 325 is a fantastic way for us to assist a very worthy cause. We were delighted to welcome John to the factory to collect his brand new one-of-a-kind tender. It’s been amazing to see the support and generosity the tender has attracted. I’d like to thank everyone who placed a bid and thanks also go to our suppliers who made it happen.’ Amlin’s UK yacht division Haven Knox-Johnston, which insures around 35,000 boats in the UK and Mediterranean, established The Haven Academy five years ago with the intention of getting more people out on the water. The Academy sponsors an annual award of £5,000 and shortlists three worthy recipients which then go to a public vote. It partners the winning cause for 12 months. Headed up by veteran round the world yachtsman Sir Robin Knox-Johnston, it is creating opportunities for people who might otherwise miss out.

‘The 2013 winners, Sea-Hear-Discover, were taking the profoundly deaf out on boats and getting them sailing,’ explains Amlin’s Keith Lovett. ‘They used the prize money to fit out some of their boats with hearing loops, as well as making some of the alarms on board more visual. Last year’s winner Sail 4 Cancer, attracted 85% of the public vote.  This charity introduces children recovering from cancer to sailing. It’s not just about giving money, we also offer our expertise and stay in contact with all our winners.’ Sail 4 Cancer used the prize money to fund adventure weekends on the water for children who have spent months in hospital receiving treatment. Spokesman Graham Precey said: ‘These weekends give the youngsters an opportunity to build their confidence and meet other youngsters who understand what they are going through.’

Sir Robin is hugely proud of the level of success the Haven Academy has achieved. ‘We have already proven that with the help of the Haven Academy, we can bring good ideas to life,’ he says. ‘It is unique in helping projects get started rather than rewarding past success. This way, we’ll really ‘Get Britain Boating’ by reaching out to non-sailors, youngsters and the underprivileged to achieve our aim.

It’s surely a sign of the times that one of the industry’s coolest charity drives of 2014 revolved around the art of taking selfies. MDL Marinas challenged berth holders, marina visitors and sailing enthusiasts to snap themselves last summer, donating £1 for every selfie received via social media using the hashtag #MyMDLSelfie. With an array of prizes including restaurant vouchers and tickets for the Southampton Boat Show, winners could also see their selfie on display at the MDL Marinas stand.

A total of 110 selfies were received and the £1,000 raised went to Ocean Youth Trust South, a charity that has a 20 year long association with MDL Marinas and has benefited from thousands of pounds raised in recent years through various initiatives. The company also sponsor the MDL Sail Training Awards annually. ‘The My MDL Selfie initiative is a fun way of engaging with our berth holders and marine enthusiasts while supporting a very worthy cause,’ explained spokesman Dean Smith. ‘We want boat users to make the most of the great British summer and share their boating moments with us.’ Celebrity fans also took part with Sir Ben Ainslie and his racing team posing at Hamble Point Marina while preparing for the America’s Cup. With the MDL Sail Training Awards now inviting nominations for deserving and talented youngsters to take part in a voyage on Ocean Youth Trust South’s training yacht John Laing in April, the partnership between the two organisations looks set to bring joy and a sense of achievement to the younger generation for many more years to come. Sunseeker also recently hosted a "Pink Evening" party in aid of the PAH Breast Cancer Trials at this year's London Boat show.  Guests of the event, kindly supported by Peters & May Global Marine Transport, had ‘lashings of fun’ fundraising for the charity, which has so far raised nearly £25,000 in the donations for the PAH raffle and silent auction.

Related article: Can the Yachting Industry Change the World?
Read more on the Cogs4Cancer charity here