Industry » Features » Can the Yachting Industry Change the World?
« BACK

Can the Yachting Industry Change the World? 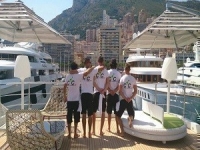 Sometimes something happens to remind us just how small the yachting industry really is. And what extraordinary friendships are forged across oceans and through seasons of exhaustion and laughter.   I spent last week thinking about a man I had never met.  I thought about him as I walked around Cap D’Antibes at sunset, looking across the blustery Bay of Angels and up to the mountains.

I thought about him again on facebook, where I saw that many of my friends had posted photos of him- friends I couldn’t have imagined were connected in any way, but were linked by a man who was always smiling.

All across the world, friends of Anthony Nzeribe were looking out at their own views, with their own memories of a man who died of cancer.  He was only 31.

‘Too young!’ we say in disbelief, railing against the possibility that we are in the danger zone, already. Everywhere we look, people are dying of cancer and it is easy to feel helpless.  But that’s not to say that we should.

2013 has been a good year for cancer research- a bloody good year actually.  In labs all over the world, there have been extraordinary breakthroughs- in targeted drugs, in DNA profiling, in stem cell research.  There has been a profusion of press releases and cautiously hopeful celebrations.

Over past decades, survival rates have risen by a third: at 2 out of 3, you are now significantly more likely to survive a cancer diagnosis than to die of it.

The balance is shifting, and science is winning the war.  But medical research takes money.  Big, big money.  Yachting kind of money.  One promising research program has spent 40 million dollars before even reaching human trials.

To this end, to raise money for Cancer Research UK, seven men and a woman are getting on their bikes on the 5th of October and going for a little ride. Antibes to Palma; just a spin round the block really.  From the International Quay in Antibes to the Pinmar Golf Tournament in Majorca.

Cogs for Cancer is, of course, a mammoth operation.  5 days, 800 km, support vehicles, catering and logistics.  Exhaustion, sore bums and no small amount of chaffing.  I’m expecting there’s a ferry involved too, or they would have to be riding some very fancy bikes.

This is a journey of sadness for those already gone, and of hope for the future: a belief in the capacity of the yachting industry to change the world.

For Adrian Long, the motivation is as personal as it gets. He has a brain tumour. Yet rather than giving up, he thought, ‘No, best jump on a bike and ride 800kms to help find a cure.’ Faced with adversity, how many of us take the hard road, let alone the hard highway?

For others it is to honour their loved ones.  Steve Crowe of Yachting Pages is riding in memory of his mother, grandmother and grandfather, all lost to cancer. Several riders asked me to mention their friend Anthony Nzeribe, who died of an extremely rare form of cancer for which there is no cure.  Not yet, anyway.

Like all epic quests should, this one has a royal blessing: HSH Prince Albert II of Monaco, a keen rider himself, has sponsored Adrian Long’s bike.

Cogs for Cancer is a yachting industry endeavour, and the roll call of riders and sponsors shows it.

So then, what can you do, either as yacht crew or shore-based? 
There were some beautiful tributes to Anthony on facebook last week, to make a person cry.  And laugh.  One said, “The only time I ever saw him not smiling was once in Geoffrey’s grocery store, when Nat forgot he didn’t like cheese.” It may sound frivolous, but it’s not.  Imagine if our friends could say the same for us when our time is up:  Oh, I only saw them grumpy once, and that was in the cold dairy section.

It’s a wonderful testimonial to a happy man.  In the memory of that man, and all the men and women who have fought, are fighting and will fight cancer in the future,  get out your wallets, scrabble in your tip envelopes, get on the static bikes at Monaco Yacht Show.   Wave them off at the International Quay in Antibes.  Be there to buy them a drink at Pinmar. And find them a chair with a soft, soft cushion. In Memory of Anthony Nzeribe

*Photo and permission kindly supplied by Anthony's family and friends

*Anthony’s family has nominated the Antoine Lacassagne Centre as their chosen charity.  If you would like to donate to the centre that gave Anthony excellent care to help fund their cancer research, click here.