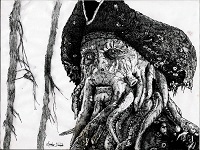 In our last feature on sailing terminology, we looked at the nautical origins of expressions such as ‘three sheets to the wind’, ‘push the boat out’ and ‘slush fund’, while dispelling other etymological myths such as ‘posh’ and meeting the imaginative folk at CANOE (the Committee to Ascribe A Nautical Origin to Everything).

I promised, at the time, to write a follow up, but the months got away from me.  Apologies all round.  Let’s start with a clean slate.

In the old days of sail, watchkeepers tallied courses and distance travelled on a piece of slate.  When the watch changed over and all was deemed well, the slate would be wiped clean.  We now use this expression to indicate a fresh start in some aspect of our lives.   If only it were as easy as wiping some chalk off a board.

It’s time to carry on, as I sound a little down in the doldrums.

CARRY ON TO AVOID THE DOLDRUMS

When ships sailed the trade routes, the officers made the call to ‘carry on’ when the breeze picked up, meaning to hoist all the canvas that the yards could carry to make the most of the available wind.  If there was no wind, a situation frequent in equatorial regions, then the becalmed ship was known to be ‘in the doldrums’, an expression now used to indicate that a person is feeling a bit down and stuck.  Perhaps even a little cranky.

Fondly known for a national propensity towards moaning, the word ‘cranky’ perhaps suits the English at times, but the word actually originates from a Dutch word for an unstable boat, ‘krengd’. I’d be krengd too if I were wearing wooden shoes.

Meanwhile, the word ‘limey’ for a British sailor, now used for any old person from Blighty, came about from the practice of giving a ration of lime juice to sailors on navy ships to ward off scurvy.

Mind you, I think it’s fair to be cranky if you’re living on leathery pieces of fat (chewing the fat), weevilly biscuits and lime juice. That’s not exactly a ‘square meal’, an expression ironically created because of the square plates the sailors ate from.

It’s small wonder they gave them grog to binge on to keep them toeing the line.

BINGEING ON GROG AND TOEING THE LINE

Perhaps unsurprisingly given the doldrums and ghastly food, some of the language’s best drinking expressions come from our sailing past. The word ‘grog’ has a splendid origin, named as it is after the grogram coat worn by the British Commander Admiral Vernon, who became famously unpopular with sailors in 1740 after ordering that the daily half-pint ration of rum be diluted with water.

This limited the ‘binges’, an expression for the rinsing out of any cask, which soon came to be known as finishing off a cask of rum.

After a person has gone on a grog binge, it must have been quite difficult to ‘toe the line’, a routine where crew were called on deck to fall into line, edging their toes against a caulk seam to make sure they were lined up straight.  Also, when a sailor had misbehaved, he was sometimes called to the deck to ‘toe the line’ for hours in the hot sun, to learn the error of his ways.

If they still failed to improve their behaviour they would be quite literally bent ‘over a barrel’ to be whipped, possibly with a cat of nine tails straight out of the bag. No doubt, at this point, they would be bleating ‘m’aidez’…yes, for those of you who twigged, you’ve just discovered the French origin of the international word ‘Mayday.’  Help me. Rescue me.  Stop hitting me.

If the person being beaten didn’t learn their lesson because of general stupidity or mental instability, it would be said that ‘they didn’t have both oars in the water’, an early nautical version of ‘a few sandwiches short of a picnic’, or ‘crazy as a box of weasels’.

Some people just can’t help themselves, despite knowing there’s trouble ‘in the offing.’

This is my personal favourite, so despite the possibility that many haven’t heard the expression ‘trouble in the offing’, I am including it anyway, because I feel like it. (It is the way of a cranky person to be so obstinate, one who perhaps doesn’t have both oars in the water at this moment in time.)

The offing was actually a physical place: the part of the ocean that could be seen from land. So when a ship was seen coming in from a vantage point on land, the ship was described as being ‘in the offing.’ It now refers to something that is not yet happening, but will be soon.  Why that pleases me so much, I do not know. It makes me slightly less krengd. For another discovery that pleased me, we are off to the chandlery.

The word ‘chandlery’ was actually the name for a shop that makes and sells candles. Before generators and oil lamps, ships used a lot of candles on journeys, and when in port, would go to the chandlery to stock up.  The chandleries took to stocking rope and tar as extra products..and so the modern chandlery was born. But sadly, as we discovered last time, not all of the legends of nautical origins are true.

One of the greatest examples of etymological myth is the phrase ‘it’s cold enough to freeze the balls off a brass monkey.’

IT'S COLD ENOUGH TO FREEZE THE BALLS OFF A BRASS MONKEY It saddens me to say that ‘it’s cold enough to freeze the balls off a brass monkey’ is almost certainly one of these apocryphal expressions.

For those who don’t know the origin of this expression, here it is.  It was thought that on naval warships, cannonballs were stacked on deck in a pyramid on a brass tray called a ‘monkey’, which had indentations in it to rest the balls in.  The story goes that when the weather got very cold, the iron of the cannonballs contracted, allowing them to fall from the brass tray and skitter around the deck.  Hence, ‘it’s cold enough to freeze the balls off a brass monkey.’

Here is a short list of the main reasons this theory has been disproved:

The Royal Navy records show that cannonballs were not stored in pyramids on ship’s decks but instead in planks, and they were stored below deck when not in battle to keep them from rusting and jamming the cannons.  Also, a pyramid of balls on the deck of a sailing ship?  That would be entertaining when it was time to tack. Presumably, even if it were true at some stage, if cannon shot was rolling around on deck each time it got chilly, the British Navy would have found another means of storage, given that they experience a fair bit of grim weather round those parts.

As Gary Martin of phrase finder.uk  points out, ‘For those wanting a bit more detail, here's the science bit. The coefficient of expansion of brass is 0.000019; that of iron is 0.000012. If the base of the stack were one metre long, the drop in temperature needed to make the 'monkey' shrink relative to the balls by just one millimetre, would be around 100 degrees Celsius. Such a small shrinkage wouldn't have had the slightest effect.’

As for the true origin of the expression, well it seems that ‘brass monkeys’ was a popular thing to say at the time back in the 1800's; as Martin describes further, there are documented phrases about the little blighters, including 'talk the leg off a brass monkey', 'singe the hair on a brass monkey'.

Given that, it is extremely likely that sailors simply adapted a common expression at the time to describe that it was cold.  The first version is clearly more interesting, but so be it.

We shall hereby send that myth to Davy Jones' Locker.

Davy Jones' Locker is a common expression for the bottom of the sea, normally used in relation to drownings and shipwrecks.  While there's no doubt that it's a nautical expression, there is some confusion about its exact origins. 'Davy Jones' as a character has existed since at least the early 1700's and one of the most famous examples of it in print comes from  Tobias Smollett's The Adventures of Peregrine Pickle, where he describes Davy Jones thus:

'This same Davy Jones, according to sailors, is the fiend that presides over all the evil spirits of the deep, and is often seen in various shapes, perching among the rigging on the eve of hurricanes:, ship-wrecks, and other disasters to which sea-faring life is exposed, warning the devoted wretch of death and woe.'

Davy Jones the fiend is described in this story as having three rows of teeth, a tail, horns and saucer eyes. I think we can be relatively sure this one is not true.

Other explanations of the character are that he was based on a real pirate named David Jones, or a short-sighted sailor named Duffer Jones who fell overboard, or even a dastardlly pub owner in the 1500's who locked up drunk patrons in his ale locker and sold them onto ships to fill the draft. Many believe the expression originated from Jonah of the bible, who was thrown into the sea.

All we do know is that sailors have been notoriously reluctant to speak his name, for fear of finding themselves among the seaweed and the fishes. But then, sailors are a notoriously superstitious lot.  This is a group, after all, that was known for thinking that the antidote for the bad luck of a redhead talking to them was to punch them in the nose.