100 Years of Sailing - Key Milestones in Yachting and Racing 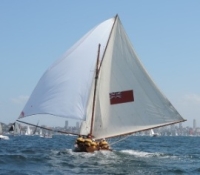 Which sport boasts the world’s longest-running international competitive sporting event? Medieval jousting fell out of favour a while back, so it must be football (soccer)… right? Try again. Cricket, maybe? Nope. Perhaps surprisingly, the answer is sailing.

The America’s Cup, began in 1851 (some 164 years ago) and still runs to this day. The competition began after the Royal Yacht Squadron’s 100 Pound Cup was won by the yacht America (representing the New York Yacht Club) off the south coast of England.

It was then decided that the trophy would become ‘a perpetual challenge cup for friendly competition between nations’. A challenger team would duel against the current holders to claim the silverware. And so the America’s Cup – now one of the most publicised and fiercely contested sailing events – was born. Well, this got us thinking: boats have been around out of necessity – to perform a specific function, whether trade, transport, or warfare – for longer than we can remember. But when did boats become boats just for the sake of being boats? In other words, when did they start being used simply for fun, for sport and leisure?

In this piece, OnboardOnline looks back over 100 years of sailing, how it has been popularised globally, and the evolution of design and technological innovations that make it all possible.

The wealthy and powerful have long enjoyed cruising on the water, but popular recreational sailing is a relatively new phenomenon. Modern sailing for sport can be traced back to the 17th century Netherlands, with the oldest yacht club in existence for nearly 200 years.

But the last century or so in particular has seen it really come to the fore.

We have witnessed the evolution of sailing regattas from fairly small, localised events – often involving members of one specific yacht club and exclusively available to a small elite – to large-scale, widely-publicised, global sailing events involving thousands and followed by millions around the globe.

To put this surge into perspective, consider the world-renowned Round the Island Race (off the UK’s Isle of Wight).

The inaugural 1931 event featured a meagre 25 competing boats. In 2014, around 1,500 boats entered, with up to 16,000 crew pulling the ropes! The teams ranged from the seasoned professional to the leisurely weekenders. The professionalisation of sport

The turn of the 20th century was bookended by two major milestones in the evolution of yachting: the introduction of the modern Olympics in 1896 and the founding of the International Yacht Racing Union (IYRU) in 1907.

Although, ironically, the sailing events at the inaugural Olympics were cancelled due to poor weather, the very fact that it was included is hugely significant.

In the years that followed, the Olympics have undoubtedly played a pivotal role in bringing competitive sailing to new audiences, allowing much greater TV coverage than would otherwise be afforded to the sport.

The IYRU was first set up as a governing body to regulate and promote competitive sailing.

With ever more clubs, crews and teams competing in events globally, there grew a need for internationally-recognised standards and rules so they could compete fairly and on a par.

More recently known as the International Sailing Federation (ISAF) the organisation continues in this capacity today, working closely with the Olympics and other events.

The second half of the 20th century saw the rise of big, corporate-sponsored events and multimillionaire tycoons taking on world record attempts and challenges.

Joining the America’s Cup is the Rolex Fastnet Race, now in its 90th year. The Whitbread Round the World Race (now the Volvo Ocean Race) began in 1973, with teams competing every three years in legs across the globe. These races, though thrilling, are not without their casualities and three sailors tragically died after being swept aboard in the first Whitbread event.

But before a crew goes anywhere near the water, there is a huge amount of meticulous planning and many logistical hurdles to overcome, not least the question of fundraising.

Like all sport these days, sailing is big business. You only need to look at the corporate sponsors of major teams and tournaments to see this. They may not ever attract the mass TV coverage (and revenues) that is afforded other events such the Olympics or FIFA World Cup, but it is a multi-billion pound business.

And as with anything that involves business and money, and with so much at stake, inevitably there come disputes. As competition reaches boiling point, the America’s Cup and the likes have been marred by law suits and accusations of ‘espionage and sabotage’ in recent years.

Raising the profile of yachting

Aside from the big events, a few big personalities have helped to raise the profile of yachting over the years, ensuring it never strays too far from the headlines: pioneers like Robin Knox-Johnston and Sir Peter Blake highlighted the excitement of ocean-bound yachting.

Knox-Johnston completed his single-handed circumnavigation of the globe in April 1969, three months before mankind landed on the moon. This feat represented human endeavor and endurance; testing oneself to the limits. Laura Dekker, a young Dutch girl and star of the documentary, Maidentrip, courted the headlines in her quest to sail single-handedly around the globe, which she completed at the age of 16 and a half.

One potential obstacle in the rise of yachting’s popularity has been the common perception as a rich person’s pastime.

The erosion of elitism has been gradual and still has a way to go. Making sailing accessible, affordable and exciting to all regardless of walk of life, income or physical ability is in itself the biggest challenge to its continued longevity.

While most of us will struggle to afford our own yacht, there are still plenty of other ways to get out on the water. Whether chartering a modest day boat or a cavernous, glistening megayacht, there is something out there somewhere for most budgets.

Many charitable foundations, such as the Jubilee Sailing Trust and Sail for Charity have been set up to help the disabled, infirm or underprivileged experience sailing hands on. Just comparing the design of the first winner of the America’s Cup to those competing today will confirm that design has come a long way in the last century.

While there’s no denying the beauty and elegance of classic yachts, design in yachting, much as in motor sport, continues to evolve and push the boundaries.

Technology has also changed dramatically over the last century, influencing everything from the materials used in hull construction and the fabric in sails  (from hemps and cotton to high-performance, stretch-resistant synthetics and laminated sails), to the evolution of auto-helm systems and GPS.

Professional race teams also harness technology for competitive advantage, in design as well as the simulation of conditions and to test components’ resilience.

For the rest of us, technological advances have made a huge difference to affordability, first with the introduction of GRP composites in the 1950s and later with honed technology and production methods. In real terms, the price of owning a boat has tumbled. The next big change was marina berthing. Easy access to boats for cruising and racing made it more attractive and safer for families. This in turn impacted boat design because berthing prices were based on overall length. This meant that the traditional designs with beautiful long overhangs at bow and stern were at a big disadvantage.

Boats became more boxy (in official parlance the ‘Block Coefficient’ increased) to give the maximum volume in the shortest length.

Another huge influence especially in northern Europe was the introduction of efficient and reliable boat heaters.

Beforehand smelly paraffin or messy charcoal heaters were the only options. This extended the sailing season, even making it an all-year-round activity. At this point interior comfort became as important as design and performance.

The next hundred years?

As with all sports, there is the need to take it to the next level; the need to stay relevant.

A more recent phenomenon is the rise of ‘stadium sailing’, bringing spectators closer to the action. This also creates an additional revenue stream for sailing in the form of ticket admissions. The Extreme Sailing Series has drawn huge crowds to competitions.

World-class facilities were built in Weymouth and Portland in time for the 2012 Olympics, while the America’s Cup now has its own Pavilion in San Francisco for hosting inshore events. Aarhus Bay in Denmark also has great facilities for inshore sailing, as demonstrated in their bid to host the 2018 ISAF World Sailing Championship, having recently hosted the 2013 49er and 49er FX European Championships.

As one competitor noted at the time, ‘…it’s intense and to be so close to the spectators and to be able to broadcast it live on TV… is really good for our sport’.

Sailing is also big news in the Gulf, and as the region itself becomes increasingly important on the world stage, this too is likely to have an impact on sailing’s international profile. All in all, the future for sailing is bright. 1826: First Cowes Regatta (later to become Cowes Week) in the Solent, UK (captured in the 1827 painting by esteemed painter Turner)

1896: ‘Yachting’ included in the inaugural modern Olympics on 1896 held in Athens (although events were cancelled due to bad weather)

1931: Inaugural Round the Island Race won by Merry Conceit (course round the Isle of Wight)

1993: First winner of the Jules Verne Trophy for sailing round the world in less than 80 days is Bruno Peyron’s Explorer

Felix Rowe with contributions from Tim Rowe
Next month we look at 100 Years of Charter.

The Charitable Side of Yachting
Anna Nina: Putting Sailing on the Map in Albania
Can the Yachting Industry Change the World?