Sustainability & Conservation in Yachting » Sustainability » The Suez Canal and The Med: Environmental concerns over expansion
« BACK

The Suez Canal and The Med: Environmental concerns over expansion 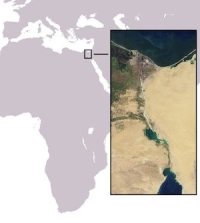 While many are grinning happily over news that Egypt is constructing a New Suez Canal – one that will nearly double the current canal’s capacity – environmentalists have received this same news with obvious concerns.

Often lost in the headlines following Egypt’s rather abrupt announcement in August, which outlined the landmark $4 billion investment, is the concern among scientists over how this new connection between the Red Sea and the Mediterranean Sea might further alter ecosystems.

A group of 18 scientists with specialties in marine ecosystems published a warning in October, which sought to have Egypt first conduct an impact study in order to determine any possible environmental ramifications. The scientists called the announcement “ominous news,” and called on the signatories of the Barcelona Convention and other international organizations to push regional players to first conduct the study, and consider how to mitigate any possible damage.

There is real worry that the Mediterranean Sea’s ecosystems will undergo potentially drastic changes as contact between it and the Red Sea increases. The scientists, who published their warning in the scientific journal Biological Invasions, said the canal is already “one of the most potent mechanisms and corridors for invasions by marine species known in the world. Further, molecular methods demonstrate high levels of gene flow between the Red Sea and the Mediterranean populations.”

Of the nearly 700 non-indigenous species currently in the Mediterranean, scientists have determined that around 350 of these entered through the Suez Canal since 1869.

After all, it is important to understand that the Suez Canal is an open waterway. No locks exist. No barriers. Marine species can move as freely as ships (more so, given that they don’t have to pay or wait for permission from the Suez Canal Authority). This means that, beginning in 1869, the Mediterranean Sea and the Red Sea were connected for the first time in human history and well beyond.

Two completely different ecosystems were suddenly opened to one another without any controls. The silver-cheeked pufferfish, for example, did not have to clear customs in order to migrate into the Mediterranean. The pufferfish are toxic and have caused people to require medical treatment in the Eastern Mediterranean.

Two other species have damaged broad sections of seaweed forests, while others are “noxious, poisonous or venomous and pose clear threats to human health,” the scientists say.

According to The Conversation, the invasive nomad jellyfish have made the waters along beaches across the south-eastern Mediterranean unswimmable for a month or two every summer.

“The enlargement of the canal will increase the number of invasions from the Red Sea resulting in a diverse range of harmful effects on the ecosystem structure and functioning of the whole Mediterranean Sea,” Bella Galil, one of the 18 scientists who signed onto the warning, told The Guardian.

Foreseeing this eventuality, French zoologist Leon Vaillant, called for a baseline study of the environments when the original canal was being built, though his wishes were largely ignored at the time.

It appears that the same may happen today.

Despite the risks of increased damage to the Mediterranean, it doesn’t appear as if Egypt has offered any recognition of the requests and appears to be in no way inclined to halt construction in order to conduct an environmental impact study.

Already non-indigenous populations have established “thriving populations” from Libya to Greece, while several others have spread into the Western Mediterranean, scientists say.

“The individual and cumulative impact of these non-indigenous species adversely affect the conservation status of particular species and critical habitat,” the scientists claim.

The scientists concluded their letter with this plea: “While global trade and shipping are vital to society, the existing international agreements also recognize the urgent need for sustainable practices that minimize unwanted impacts and long-term consequences.” An environmental study, they say, “would curtail, if not prevent, an entirely new 21st Century wave of invasions through a next-generation Suez Canal.”