Mission Ocean – From Panama to Paradise 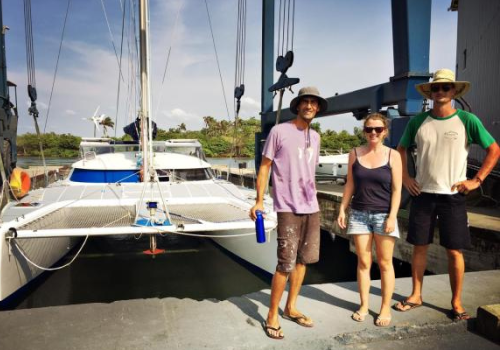 We awoke one morning to the sound of scratchy feet on the deck above us. The shipyard in Shelter Bay, where we had hauled out Contigo for a well-needed bottom scrub and some urgent repairs to a sail drive, was literally in the middle of the jungle.

On the Atlantic side of the Panama Canal, near to the not-very-beautifully (but quite aptly) named town of Colon, the yard and marina have taken over what used to be a US military base.

From 50 yards behind the last dock, and for miles and miles around, there is nothing but thick forest from which howler monkeys complain loudly every time it starts to rain. Crocodiles cruise up and down the docks, anteaters creep across tree branches, and iguanas take a dip at the dinghy dock to cool off.

We dashed on deck in our pyjamas, expecting to find a monkey, sloth or even – inspired by tales in the marina bar the night before – a jaguar leaving paw prints in our fresh non-skid paint. It turned out to be a cockerel that had escaped from the nearby coastguard compound, where apparently they like their eggs fresh in the morning.

After a month in the yard (and, frustratingly, without having resolved our sail drive issues), we crewed up with four willing French line-handlers, and confirmed our slot to cross the Panama Canal. Unlike many small sail boats who are generally allowed two days to cross with a night spent at anchor in the Gatun lake, we were alloted a 12-hour passage starting in the pitch black at 5am. We were so excited that we hardly noticed the ungodly hour as our pilot (technically, and probably for insurance reasons, known as a Canal Advisor) hopped on board and instructed us to raise the anchor. Henrique and I both had goosebumps watching the first lock gates close on the Atlantic, and the final ones open into the Pacific at the end of the day. Whilst we had covered less than 100 miles in the course of the day, much of it in the wakes of huge cargo ships, it suddenly felt as though we were a lot further from home...

We spent a few days in Panama City, a surprising mix of old and new, with a historical centre in the middle of huge renovations in the shadow of a business district with gigantic skyscrapers. We finished our provisioning in style with a trip to a genuine French cheesemonger in the Casco Viejo, made final Skype calls to our families and headed to the Perlas islands to wait for a weather window. The window came a few days later, and on April 21st we set a course for the Marquesas Islands and headed out into the Pacific. On the first day, as the islands disappeared over the horizon, Mother Nature treated us to a real show. Humpback whales, turtles, sharks and a huge super pod of dolphins playing around the boat for hours in beautiful conditions. But we were shocked and dismayed by the volume of trash that we saw; how can you enjoy dolphins jumping and surfing when they are popping up next to polystyrene cups and burger boxes? After our crossing, we met boats who had seen washing machines float by in this same zone, and one who had hit a fridge.

As the days wore on, it quickly became clear that this was not just a problem local to Panama; not a day went by during our 30-day crossing when we didn't see some kind of trash floating by, and about 75% of it seemed to be plastic bottles. I kept thinking back to our Atlantic crossing, where we sat down to enjoy a drink on the trampoline at the halfway point, only to watch a green plastic Perrier bottle bob past. Besides the bottles, we saw a lot of fishing waste, and it seemed that every boat that chose to sail north of the Galapagos (we ended up going through the middle) got caught up in fishing lines and huge, unmarked nets. But we did very much enjoy our crossing, and it would be hard to choose the best moment. We drank bubbly and watched the sun go down over the Equator, took showers in the rain, had a swim in the Galapagos, and watched open-mouthed as dolphins jumped through bioluminescence off our bows at 3am.

We read books, played cards, fished for fat little tuna and listened to our crew member Antoine play old French hits on his ukelele. We chased squarking boobies off the deck with brooms, only for them to settle back in the same spot moments later, depositing smelly presents on the solar panels for us to clean up. I baked 18 cakes, and we happily munched our way through all the wonderful fresh produce (and French cheeses) that we had found in Panama.

We could see the peaks of the Marquesas Islands from sunrise on the last day. We had chosen to drop anchor in Atuona on the island of Hiva Oa, where we had read that we could check in and buy fresh vegetables (we had finished our last pumpkin and onions the night before, and cheese was a distant memory). As we neared the island, all three of us gazed up at the lush green cliffs and spotted the first houses that we had seen in a month. A few hundred meters before rounding the headland into the anchorage, I joked that it would be a shame to be alone there after such a long time at sea. A couple of masts came into view, and we were pleased at the idea of having someone to raise a glass with that evening. But as we came closer, rows upon rows of masts began to appear, and we took some quick measurements on the charts to see whether there was going to be any space left behind the little harbour wall.

All of a sudden, after 30 days of open sea, there were going to be an awful lot of obstacles to avoid... We picked our way through and eventually found a spot near the pebble beach, setting a stern anchor as everyone else seemed to have done, to avoid bashing into our too-close-for-comfort neighbours. We popped open a bottle of cava and nibbled on our last coconut, feeling rather anticlimactic amongst thirty other boats who had almost certainly just crossed the same ocean as us, and weren't paying us any attention.

But we would quickly come to love the island paradise of Hiva Oa, and especially the people that we met there. We moved to a better spot in the anchorage the next day, and made a point of welcoming new neighbours with gifts of fruit and hearty congratulations on making it that far. Onshore, we were welcomed with open arms in the local schools and ran pollution workshops for almost every child in Atuona, from age 6 to 16, and even a class on microplastics on the beach for the cruiser kids in the anchorage. We stumbled across a festival in a local church, where we were treated to wonderful songs and dances, given flower necklaces and fed copious amounts of chicken and rice. A smiling white-haired man invited us to pick fruit and vegetables in his garden the next day, and sent us home with far more than we could ever eat. This was our first introduction to the Marquesian people, their delicious fruit and their never-ending generosity.

We have just left the Marquesas after three amazing months, where we were adopted by so many smiling families, visited plenty of schools and ate our own body weight in fruit many times over. There is so much beauty in these little islands that I wouldn't even know where to begin, from the landscapes to the music, from the people with hearts of gold to the manta rays that cruise casually through the bays. We left because we had to move on, otherwise we would still be there. Marquesas, we'll be back!