Sustainability in the Spotlight at METSTRADE 2019 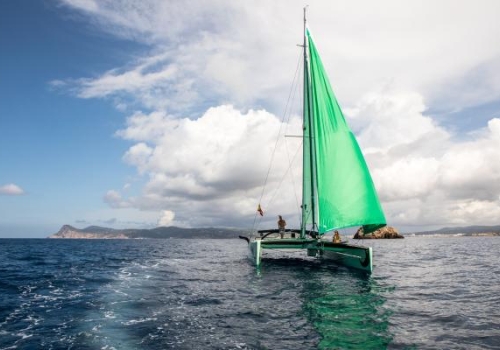 To most people, superyachts and all their excesses may seem unlikely candidates to boast any green credentials. However, in recent years, the industry has been striving to build, run and dispose of superyachts in ways that are both eco-friendly and won’t cost the earth. Shipyards, owners, crew and brokers are all expressing growing concern for the environment, and nowhere was that more apparent than at this year’s METSTRADE in Amsterdam.

Broadcasting live from the show each day, SuperYacht Radio’s Maeve and Dave Dempsey spoke to METSTRADE director Irene Dros and environmental sustainability co-ordinator Peter Franklin to discuss the latest news and developments presented at the I-nnovationLAB during the three day event.

The Global Challenge of Biofouling

The big discussion on the first day was all about biofouling and biodiversity, with Peter explaining that: “UN reports says the loss of biodiversity is a silent killer on a par with climate change so, when it comes to the environment, there’s no better place than METSTRADE to bring that to the fore and discuss what can be done about it.”

Biofouling and biodiversity were the focus of Global Project task force GloFouling, which saw an expert panel of six speakers discussing what this means for the industry, including best practices to avoid the transfer of invasive aquatic species through improved biofouling management. The emerging number of alternative (non-paint) concepts designed to control fouling below the water line whilst aiming to reduce toxicity levels were also a key part of the discussion.

The panel, which was moderated by Albert Willemsen, author of The Challenge of Global Biofouling, was made up of Dr Gareth Prowse, chair of the Antifouling Coating Committee at IPPIC; Manon van Meer, manager of sustainability and funding at Waterways Netherlands; Dominic Findlow, technical director at NRG Marina Ltd; Dan Reading, head of sustainability at World Sailing; and Rik Breur, managing director at Finsulate antifouling fiber wrap. Another big topic was fully electric boats and hybrid propulsion. Keenly attended, experts delved into the need for cleaner propulsion systems in the marine industry, with the most obvious solution being the electrification of new and existing fleets.

“Henk de Vries from Feadship gave the keynote speech this morning, and one of the interesting things I found was that while everyone talks about reducing emissions by 2050, they are on a target to have no emissions at all by 2025,” Peter told Superyacht Radio. “The belief is that new owners who want to buy a superyacht will now opt for electric propulsion, so it’s a really big signal to the industry that that’s the way things are going to go.”

“Feadship and other big shipbuilders are leading the way and we want people to follow,” added Irene. “They are one of a few of the pioneers in the industry who are preparing themselves for the next generation.”

How Green are we a Year on?

Following on from the question asked at METSTRADE 2018, ‘How Green is Green?’, the second day of the show explored how the quest for more sustainable boating has progressed in the last 12 months. Topics included disassembly and life cycle assessment, material selection for better recyclability at end-of-life and the development of energy storage solutions, the six speakers represented three boatbuilders – Sunseeker in the UK, Italy’s Amer Yachts and Vann Yachts in Holland. Of particular interest was the latter, having created a catamaran built entirely with sustainable materials. Managing director Igor Kluin explained that it will be built using aluminum which is 75% recycled, and use only sustainable materials throughout the construction and interiors. “A number of other questions came up during the discussion which made for very interesting listening,” explained Peter. “People were talking about hydrogen propulsion in the future, which became quite controversial as there were a lot of different views – one being that we’re very close to it, as we already have hydrogen-powered buses and trains. However, another believed that the current technology will consume so much volume on a yacht that the average owner won’t want to give up that much living space just to be green.”

Further issues with hydrogen propulsion included resistance from captains due to the operation of the vessel becoming more difficult and the need for extra training for engineers, as well as the fact that hydrogen needs to be kept at a low temperature, which is difficult to do on a boat. However, with miniaturized systems and ambient-temperature hydrogen on the horizon, Peter believes it’s only a matter of time. “The overall view is that in three to four years, we will see hydrogen-powered boats,” he explained.

Another hot topic was composites. Barbara Amerio, CEO of Amer Yachts, announced that they are the first superyacht builder to adopt a new composite called FILAVA based solely on volcanic rock and completely recyclable at end of life. Amer is currently using the product in their yacht interiors with plans to adopt it throughout the construction process in future.

Around the world an increasing number of vessels are reaching the end of their useful lives and, with millions of them built from virtually indestructible fiberglass in the ‘70s and ‘80s, it’s now that these ‘end-of-use’ boats are becoming an issue.

METSTRADE has championed this subject over the past five years, and discussions on the final day were split into two sections to address the disposal of the current heritage fleet that goes back 50 years and how to avoid the same problems in the future. An innovative solution was presented by Marnix Hoekstra of Vripack Yacht Designers, who explained how computerization can be used to design a yacht in such a way that it can be disassembled much more easily. Reporting on air, Peter said, “With computer drawings you can do almost anything – you just need the will to do it and the ability to forget the traditional way you have been doing things for the last sixty years. Vripack were very positive about this approach, and their designers are already starting to think that way.”

The disposal and re-purposing of composites was another hot topic. ‘We had two professors on the panel who are very skilled in composites, and they came with materials which consisted of pieces taken from boats that had been combined with another material to form a sheet material. From this you can then make other furniture for yachts such as kitchen tops,” Peter told SuperYacht Radio. “Here in the Netherlands they are using it for lining canals. It’s been tested and found it’s just as good as hardwood and it lasts much longer.”

“In total we had three different panelists from three different countries with three different methods that are all successfully turning fiberglass into another usable material. There are solutions, but what we need now is to find the funding to take these development projects into production projects and market them so that people buy them.”

In the context of METSRADE, sustainability is now a central cause. “Sustainability is such a growing section of the show as it’s part of everything that we do – construction, the yards and the superyachts. Next year we will focus on the charter industry too, as there are more and more questions about how that side of the industry is getting together and how it is organised. It’s a niche subject, but it’s a completely different one to what we have discussed so far.”

“Sustainability as a focus has become more and more prominent since we started carrying our blogs on a year-round basis – everyone wants to get involved, and even in the last few weeks we’ve had people calling us saying they want to join our panels. The whole popularity is growing, and I think that’s because we have a year-round presence.”

“The great thing is that everyone has said: ‘Can we do this again next year?’. Everyone is developing projects and in another 12 months they will be developed further.”