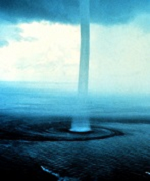 The Great Britain, one of the 12 yachts in the Clipper Round the World race, ran into one of its toughest tests — a powerful waterspout — mid-passage on the Brisbane, Australia, to Singapore leg of the race today.

“I was down below, and on deck they were starting to put a reef in the mainsail in anticipation of another squall, which was fast approaching, when I heard a word on board that I had never heard before in 30 years of sailing,” Great Britain skipper Simon Talbot said in his log.

“That word was ‘tornado,’ and then within a split second we went from about 5 knots of wind to about 100! We were knocked down to 90 degrees, absolutely flat on the water, I was thrown into the engine room and pelted by screwdrivers, sockets and pieces of pump, the contents of the galley sinks and cupboards were scattered randomly around the saloon, and on deck it soon became clear that it was a bit of a mess!” Thanks to the quick thinking of the skipper, no damage was caused to the crew or boat during the brief and unexpected encounter, according to race organizers.

The Clipper Round the World is the only race in the world in which the organizers supply the fleet — 12 identical 70-foot, stripped-down racing yachts, each sponsored by a brand and led by a fully qualified skipper, employed to lead amateur crews safely around the globe.

To keep an eye on the fleet’s progress and to view the official race viewer, click here.