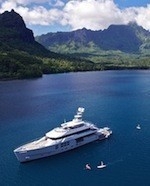 Frances and Michael Howorth asked some of the top names in the super yacht industry to answer the following question: "What is the weirdest/craziest request you have had from a client during the building of his yacht?"

Here are just some of their more printable answers.

Jonathan Beckett, CEO of Burgess
The weirdest and craziest request was from a lovely client who suddenly decided it was essential to install an English Garden on deck complete with a real grass lawn. The reason? To make the family dog feel at home! We even had to buy a lawn mower and employ a gardener!

Maurizio Magri, CEO Kaiserwerft
One owner had to explain to me why, despite adoring his wife they had to have separate ensuite cabins on opposite sides of a corridor. "She walks in her sleep,", he told me "and although she cannot ever remember doing so in the morning, she can wake me up by hitting me during her walk. If we put her cabin on the other side of a wooden floored alleyway I will hear her coming and prepare myself."

Rodney Martin, Managing Director Fitzroy Yachts
Owner’s rep came on board late in the build, thought that the saloon cabin wouldn't be tall enough to accommodate the Owners cowboy hat, and asked us for a variation to raise the saloon roof by 100mm. The variation came back at several hundred thousand - and the next day it was approved by the owner!

Vincenzo Poerio, CEO Benetti Yachts
The Owner of Ambrosia III had a passion for astronomy and wanted a planetarium inside the sky lounge. He wanted it to simulate a real night view of the stars, planets and constellations. It had to be able to change and rotate (and open) according to the real boat position in terms of latitude and longitude. We did it of course, gaining at the same time a deep knowledge in complex astronomy!

Marcel Onkenhout, CEO Oceanco
At the early stages of the design our Naval Architects, the Designers and the Owner were discussing the position of the heli-deck and the swimming pool. No one could agree and finally the owner stood up from the table and declared “Make the pool larger and we will land the helicopter on top of it!” The rest is history.

Roland Kruger, CEO Newcruise
Life is never dull designing super yachts but one of the most amusing requests we had was from someone very serious. He needed to have his yacht so well equipped from potential threats that we even went as far as designing a stylish vehicle to keep on board for use by him and his family to escape in, should they ever be attacked. The brief called for a high speed, had to have Kevlar armour plating craft capable of surviving chemical, biological, nuclear and rocket attacks. Even a mounting position for an anti aircraft gun system on the upper deck had to be investigated. The idea was eventually dropped when he realised how expensive it would be to say nothing of the legal burden it would bring with it!

Tim Saunders, Tim Saunders Yacht Design
I remember joining a client on board his private aircraft for a trip to Turkey to visit a yacht he was planning to convert. On the way, he asked me what I would design for him if he were to build a new yacht. I took out my sketchpad and began draw. I gave him my first thoughts, 3 hours later as we landed in Turkey. At the meeting in the shipyard he stunned everybody, including me, when he scrapped the conversion project and held my drawings in the air. Then he said, "Gentlemen we are going to build a brand new 50 metre, and here is what she is going to look like."

Luca Bassani Antivari, President of Wally
My favourite story is about a guest who wanted his 50 metre yacht to have a glass bottom so that he did not need to get wet while watching the fish. He wanted it to be a sort of sailing snorkeling, or snorkeling while couch potatoing experience.