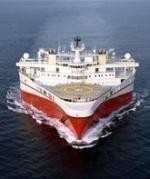 A seismic vessel, the Ramform Titan, has sometimes been dubbed  "the world's ugliest ship" as it has a 70 meter wide stern, making it one of the  widest boats in the world.  It is owned by Norway's Petroleum Geo-Services  (PGS).

The ship was launched on April 26 from the Mitsubishi  shipyard in Nagasaki, Japan (see video at the end of this article).The giant oil-services vessel has  docked in Bergen, Norway for the first time on Saturday morning and will remain  in port until the weekend, when it sails off to the South Atlantic to shoot  seismic in the Falkland Islands.The ship's captain, Cato Grasdal told Bergens Tidende (in Norwegian), "The ship has tremendous  power and is therefore okay to manoeuvre.""The most unusual thing is that she is  so short compared to the width, which makes her difficult to get onto the pier."

On the Petroleum Geo-Services (PGS) website a statement reads: "The new Ramform Titan Class puts PGS further ahead as the leader in safe, productive and efficient 3D seismic acquisition."  The boat's wide stern is designed to drag up to 24 seismic cables, capable of shooting seismic over a 12 km² area. The boat is powered by the ship's own on-board 18 megawatt power station.

The vessel provides an enhancement of many established features, all  incorporated for one single purpose - "to collect maximum amounts of seismic  data: quickly, safely and reliably."As can be seen in the videos, on board  there is comfortable space for an 80-man crew, and offers them a 225m² sports  arena,  a swimming pool, sauna, fitness room, 3 television lounges and an  auditorium.

The History of the Ramform

Since the first Ramform seismic vessel sailed out of the yard in May 1995 its delta shaped design has become a trademark for PGS, a symbol of innovation and an icon for our industry. The Ramform Titan, launched April 26, 2013 takes safety, efficiency and productivity to a new level. For our clients, the Ramform advantage can mean completing an exploration program safely in one season where conventional vessels might need two.

The Ramform Explorer launched in 1995, was followed by the Ramform Challenger in 1996, the four V-class vessels Ramforms Valiant and Viking in 1998, Ramform Victory and Vanguard in 1999, Ramform Sovereign in 2008, then Ramform Sterling in 2009. In April 2013 the Ramform Titan is launched in Japan.

Over the years the Ramform fleet has smashed about every seismic production record. With each new class the bar is pushed higher and the Ramform Titan does not disappoint.

Thanks to the broad beam and ultra-stable hull construction PGS is able to equip the Ramform fleet with ever more seismic equipment. The result is greater production: more and more efficient seismic with ultra wide streamer tows, then better and better resolution data with high density (HD3D) seismic. The Ramform Titan is tailored to take full advantage of the GeoStreamer® technology for better resolution, greater penetration and improved imaging. We expect to set a new batch of industry records for operational efficiency.

The first Ramform vessel, the “Marjata”, was a surveillance  ship designed for the Norwegian navy . PGS spotted the potential of the vessel, quickly recognizing that the wide stern and silent construction made her perfect for seismic acquisition where it is desired to have as little noise as possible from the vessel itself during data acquisition. The decoupled electrical generators and diesel powered generators with shock mounting ensure an acoustically quiet environment for data acquisition. The unusually broad stern enables quick and safe deployment and retrieval of massive volumes of towed seismic equipment. The Titan-class has taken that design even further.

Ramform vessels were the first to tow, eight, ten, twelve, fourteen, sixteen and seventeen streamers. They routinely tow twelve or more streamers. The Ramform Titan is equipped with 24 streamer reels: 16 are placed abreast across the stern, with a further 8 in a second row. This capability enables faster deployment, and provides PGS with tremendous survey flexibilities, efficiency and operational safety. She will typically tow behind her over 12 km2 of equipment. Several hundred thousand advanced recording sensors, encased in 16 or more cables, each up to 10 km long will be suspended in the water, 10 to 20 meters below the surface. This is an area equivalent to nearly 1500 soccer pitches, or 3.5 times Central Park.

On April 26th 2013 PGS launched a new class with the Ramform Titan. Launched in Japan, she will sail to the North Sea this summer to prove her mettle.

PGS has committed to build four Titan-class Ramform ships. The second is already in construction and will be delivered later this year. All four will be built at Mitsubishi in Nagasaki.

The Ramform Titan is easily the most powerful and the most efficient seismic ship in the world. Her a power plant supplies 1.8 Megawatts of power from three variable pitch propellers, each providing 6000kW. She offers a very safe work environment with a considerable degree of equipment redundancy that will enable more maintenance at sea, without interrupting production. The ship is fully operational with just two of her three propellers, permitting maintenance during production. Redundancy in the propulsion system extends further to dual, fully separated engine rooms. Power generation and auxiliary systems are completely separate.

Equipped with two work boats, both stern-launched, the Ramform Titan can carry out acute or ongoing maintenance in marginal weather. New maritime inspection features for stern tubes and seals have extended the period between dry dockings from 5 to 7.5 years.

Rapid deployment and recovery of the recording gear can increase production by several days per project and significantly extend the operational weather window. Steerable sources and streamers, and automated gear handling systems, have been augmented with added safety features, such as six independent source array handling booms, for faster equipment recovery. Dovetailing the onboard equipment with GeoStreamer technologies promises to make this the new benchmark for 3D, 4D and a variety of acquisition geometries.

Some Quotes Regarding the New SHIP

"The Ramform Titan takes seismic acquisition to a new level. We have combined the most sophisticated technology in the business, with the most powerful and most efficient vessel in the industry. Ramform Titan further strengthens our fleet and will give us a clear competitive edge for the next decade."

"We are very excited at the prospect of welcoming the first Ramform Titan class into operations. There has been enormous market interest for the vessel, and we look forward to leveraging the high productivity, efficiency and safety that this new vessel is expected to bring. Ramform Titan will spend her first season working on MultiClient projects in the North Sea. We expect to set more industry records for operational efficiency. This is a fantastic day for PGS and a great addition to the fleet."

"The Ramform Titan is the ultimate tool for 3D marine seismic acquisition and we look forward to taking full advantage of her power and operational efficiency in this year’s MultiClient program in the North Sea. Our ambition is to remap this province with the latest and best technology. Ramform Titan with GeoStreamer is the obvious choice."