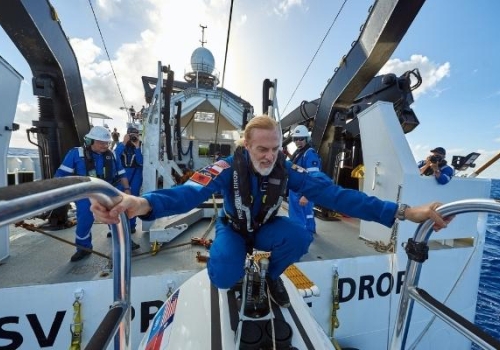 Caladan Oceanic, led by explorer Victor Vescovo, along with expedition partners EYOS Expeditions, Triton Submarines and Greenroom Robotics, successfully dived to the deepest point of the Kermadec Trench in the South Pacific Ocean on December 11th at a preliminary, calculated depth of 10,003 metres (+/- 4 metres).

It is the fourth-deepest ocean trench in the world and this was the first time a human had ever dived to its deepest point. The completion of this dive sets a new world record for Vescovo, having now completed dives to all four of the world’s 10,000-metre trenches - the Mariana, Tonga, Philippine and Kermadec trenches.

The Kermadec Trench was the final dive in the South Pacific leg of the Ring of Fire 2021 diving expedition, which has also included the first ever human descents to the bottom of the San Cristóbal (8,483 metres), Santa Cruz (9,142 metres) and New Hebrides (7,794 metres) trenches.

All dives were exploratory, mapping, and hardware-testing in nature and did not retrieve any water, soil, or life samples in accordance with local rules. No marine science personnel were aboard the vessel at any time.

Victor Vescovo said upon his returning from the deep: “I am so happy to have had the opportunity to dive the Kermadec Trench. It is one of Earth's only four 10,000- plus metre trenches, and with this dive, I am so pleased to have been able to pilot the Limiting Factor submersible to all of them. I'm very proud of the team at Triton that designed, built, and perfected this craft which gives us access to any place on the seafloor at any time, repeatedly and safely.

"It is the only commercially-certified submersible capable of such extreme dives and is an amazing tool for scientific research. It was also great to work with EYOS Expeditions and Greenroom Robotics who provided logistical and technical support for the expedition."

The maximum depth recorded at the Kermadec Trench's lowest point was 10,003 +/- 4 metres, as measured by multiple, independent and calibrated depth instruments onboard the submersible Limiting Factor, as well as on board the unmanned robotic lander "Skaff" which the submersible rendez-vous'd with near the deepest point. 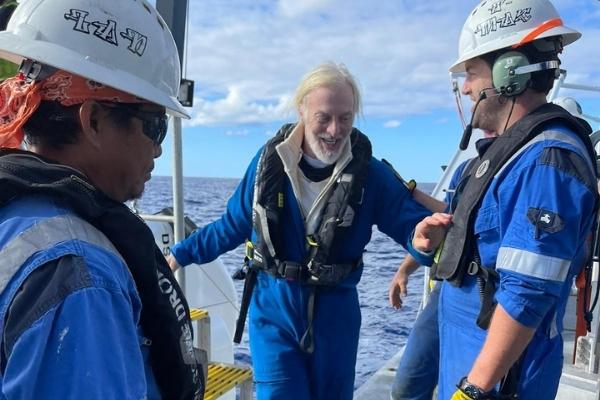 Vescovo reported seeing extreme underwater terrain Including jagged underwater canyons and cliffs, as well as what appeared to be "brilliant, gold-colored bacterial mats indicative of chemosynthesis, living off the minerals and gases coming from the rocks and fissures."

The Ring of Fire 2021 expedition commenced by journeying south from Guam on November 4th to thoroughly map the Massau, West Melanesian and New Britain trenches in higher detail than available previously, before making the first crewed decent of the San Cristóbal Trench south of the Solomon Islands at a maximum depth of 8,483.

"I've seen brightly-colored bacterial mats living and growing at 9,000-plus metres in multiple trenches now, in the total absence of sunlight, feeding off the trace minerals and methane seeping off the rocks in the deeps. This is a very different type of life and metabolism than we see in shallower water or on land. It's more similar to what we might find on other planets, I imagine," explained Vescovo.

This mission has also seen the first crewed descents to the absolute bottoms of the Santa Cruz Trench, to a maximum depth of 9,142 metres, and New Hebrides Trench, maximum depth of 7,794 metres.

“The bottom of the San Cristóbal Trench had a rather unique topography and I was surprised to see a jellyfish at a pretty extreme depth of 8,483 metres. The New Hebrides Trench by contrast was unusually sterile and cloudy - possibly due to recent seismic activity - although the sub's cameras did manage to catch another glimpse of a solitary jellyfish at approximately 7,780 metres. Seeing life at these depths is extraordinary given the ambient pressure is more than five tons per square inch in a temperature of two degrees C” said Vescovo. 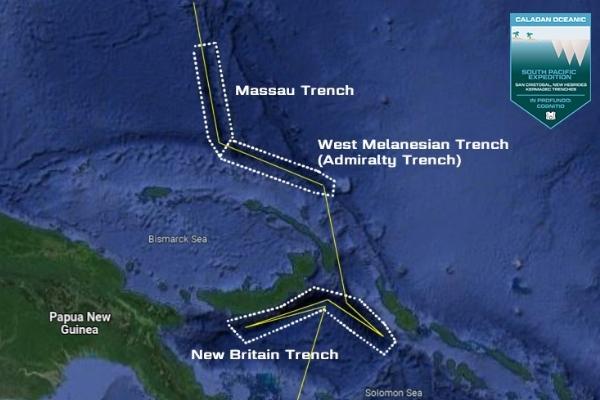 Since leaving Guam, 130,000 square kilometres of deep ocean terrain has been mapped during the expedition, including the first comprehensive mapping of the Melanesian and New Britain Trenches with the state-of-the-art Kongsberg EM124 sonar, which has significantly higher resolution than any predecessor deep-ocean sonar.

This mapping, like that in all of Caladan Oceanic's previous expeditions, is being conducted to support GEBCO's Seabed2030 project, whose goal is to map the remaining 85% of the seafloor that is unmapped by 2030.

“Given that we are diving into places that have never had a human visit, we are always a bit surprised by what we find. If the trenches are nearly identical, or very different, then that helps contribute to the overall knowledge of the deeps.

"A submersible allows us to cover a heck of a lot more area than stationary, dropped landers, or even remotely-piloted vehicles that move quite a bit slower than the sub - especially in challenging terrain. Manned submersibles offer a unique capability set that other technologies do not.” said Vescovo.

The team's next mission is to conduct the first crewed descents of the Atacama Trench off the coast of Chile as well as an attempt to make the first crewed descent of the Mid-American Trench off the western coast of Mexico. Both dives will be accompanied by formal scientific team members from Chile or Mexico, respectively. Both trenches follow the deep-ocean fault lines located off the western coast of Latin America. No human has ever visited the deepest points of these trenches.