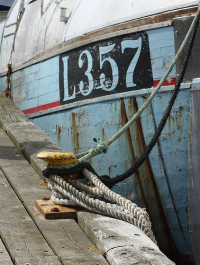 Officers are looking into claims that British skippers are forcing migrants, many of them from the Philippines, to work unpaid 22-hour days as deck hands. The workers are threatened with beatings and being blacklisted from the industry if they fail to cooperate, according to the Sunday Times.

The National Crime Agency said raids involving more than 150 officers have been conducted along the British coast, with at least 50 suspected victims found. Officials believe the discovery may be just "the tip of the iceberg".

The Filipinos are believed to be lured to Britain by local recruitment agencies promising pay of around £900 a month after paying a fee to secure a job in Britain's fishing fleet.

Instead, the seamen say their passports are confiscated when they arrive in Britain and they often receive little or no wages.

A port chaplain who declined to be named said he helped with a rescue at a harbour in 2012 after a deck hand contacted a trade union. Four Filipinos jumped overboard but were caught and attacked by the captain. Despite the skipper admitting assault, no charges were brought.

Several restaurants and supermarkets, including Tesco and Asda, declined to provide any details of checks carried out to ensure they do not purchase produce from companies that exploit migrant labour.

Spokesmen for the seafood eateries owned by celebrity chef Rick Stein and Marco Pierre White also declined to give details of any checks.

The Modern Slavery Bill, drafted by Birkenhead MP Frank Field, is expected to address the problem of the abuse of migrant workers.

The bill is due to be announced this summer and aims to ensure that all fishing vessels above 100 tonnes are fitted with tracking devices to facilitate more effective monitoring.