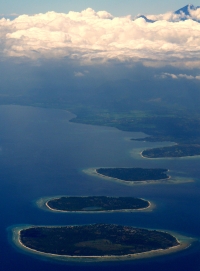 A group of 10 tourists, including two Britons, had to swim more than six hours to safety after their boat sank in rough seas while travelling between islands in Indonesia.

A further 13 people – eight foreigners and five Indonesians – were rescued on Monday, two days after the tourist boat carrying a total of 25 people sank in a storm as it travelled between Lombok and Komodo in the nation’s east, a search official said. Two foreigners are still missing.

“They were all found together, some in a lifeboat and some floating with their life jackets on around 60 miles (100 kilometres) off Sape,” on the east of Sumbawa island, said rescue official Budiawan.

Budiawan, head of the search and rescue agency on Lombok island which lies to the west of Sumbawa, said the rescued passengers and crew were recovering in Sape but could not give details of their nationalities.

The news came as reports emerged of the dramatic swim to safety by the separate group of 10 tourists, including two thought to be British.

With limited space in the lifeboat, the group decided to swim three miles to the nearby island of Sangeang, only to find an erupting volcano.

They had to drink their own urine while they awaited rescue and are now recovering in hospital.

Along with the two Britons, tourists from New Zealand, Spain, France, Germany and the Netherlands are thought to make up the group.

French survivor Bertrand Homassel said the boat started sinking after it was damaged in a storm.

Six people were taken to safety in a lifeboat, but the others had to keep themselves afloat for more than 12 hours before they decided to swim ashore.

Speaking from a hotel in Bima on Sumbawa he said: “Six people were in the lifeboat. The others climbed on to the roof of the boat, which had not completely sunk.

“We waited until midday on Saturday. We were five kilometres (three miles) from the coast - there were many big waves separating us from the coast.

“People started to panic... Everyone took the decision to swim to the closest island, five kilometres away, where there was an erupting volcano.”

Homassel said the group swam for six hours before arriving at the island, Sangeang, where they survived Saturday night by drinking their own urine and eating leaves.

They were rescued on Sunday after they attracted the attention of a passing boat.

A spokesman for the country’s search and rescue agency said there was only one person from England on board, a 19-year-old woman called Elizabeth, but the Foreign Office said it was aware of two.

A spokeswoman for the Foreign Office said: “We are aware that two British nationals have been hospitalised following an incident in West Nusa Tenggara, Eastern Indonesia, on 17 August. We are providing consular assistance.

“We are in contact with the local authorities about the incident and stand ready to offer consular assistance to any other British nationals who may be involved.”
She would not comment on the state of their injuries.

Lombok is an island in the Indonesian archipelago, east of Bali. Home to around 3.1 million Indonesians, it attracts thousands of tourists every year.