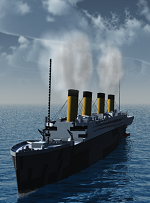 The Australian entrepreneur building a replica of the Titanic has reiterated his desire to keep accommodation on board as authentic as possible – even if it means hundreds of passengers sleeping in cramped third-class quarters.

Clive Palmer, who announced his intention to build the Titanic II in 2012, said he is still determined to press ahead with the project, despite being elected to the Australian House of Representatives in December.

The vessel is expected to make its inaugural cruise in late 2016, sailing from Southampton to New York, and – modern safety consideration aside – will be built to resemble the 1912 original. That, Mr Palmer confirmed to News.com.au, will mean around 700 passengers sleeping in tiny third class cabins with 60cm-wide beds.

"Third-class passengers shared common bathrooms, ate in dining facilities  with other third-class passengers, and slept in cabins four to a room,” it says. “Bunk beds in third class had mattresses, pillows, and blankets, but  no sheets or pillowcases. Passengers could clean up in their cabins in a washbasin. However, only two bathtubs served all 700-plus third-class men and women. “They ate three meals a day in two common dining rooms called the dining saloons. Third-class passengers did not get individual tables; they ate on rows of tables lined up next to each other."

It adds that the spontaneous party scene in James Cameron’s 1997 movie Titanic was realistic.

“The Titanic provided the General Room, where steerage passengers could sit, read, play cards, and otherwise pass the time. Steerage passengers weren’t  allowed into the areas of the ship boasting other entertainments, like the gymnasium or the pool, but they could have their own parties and dances.”

Those in third class paid between £7 and £9 (£587-£754 today) for their ticket. Whether those prices will be retained remains to be seen; last year it was reported that wealthy travellers had offered   up to $1 million each for a berth on board the Titanic II’s inaugural   sailing.

Clive Palmer has previously suggested that there will also be no televisions or internet access on board, and that passengers will be provided with period clothing should they wish to dress up.

One crucial upgrade will be the number of lifeboats. The original Titanic, carrying 2,224 passengers and crew, sank after hitting an iceberg during its maiden voyage on April 15, 1912. It had 16 wooden lifeboats which  accommodated just 1,178 people – a third of the total capacity.

Mr Palmer, who was estimated to be worth $795 million (£511m) by Forbes magazine in 2012 but describes himself as a billionaire, has refused to say how much the venture will cost.

He made his fortune in mining, but also owns a number of holiday resorts. The Titanic II isn’t his only business idea apparently inspired by a Nineties blockbuster film. Last year he reportedly took an interest in cloning a dinosaur to attract guests to the Palmer Coolum Resort near Brisbane, and he recently installed more than 100 mechanical dinosaurs at the resort.

Agree or disagree with the idea of a replica Titanic?  Leave comments below!