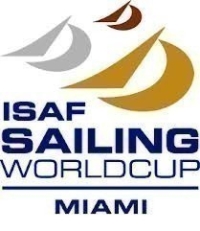 Weguelin and McIntyre clawed their way back through the medal race fleet to claim their first World Cup title since teaming up a year ago.

"The light wind isn’t usually something we tend to favour, but it’s not been a struggle this week. We’ve done a lot of training before the regatta and we felt pretty confident going in.”

Former world champion Scott managed to overhaul a nine-point gap behind Australia’s Oliver Tweddell to seal honours in the Finn class – his third victory in three regattas since his return to the class following America’s Cup duties.

However, Shaw's win was less exciting though it was certainly convincing, after she led her fleet from start to finish to win by five points.

“It’s great to start the year off with a win, and hopefully that will keep coming," she said. "I feel like I’m a very good all round sailor now."

Elsewhere, there were bronze medals for new pairing Stevie Morrison and Chris Grube in the 49er, Frances Peters and Nicola Groves in the 49erFX, Ben Saxton and Hannah Diamond in the Nacra 17 and Laser sailor Nick Thompson.

All ensured a lucrative 11-medal return for the British sailing team at this World Cup regatta, after four medals from the three Paralympic classes decided on Friday.