Yachting News » Of Interest » The Ultimate Grand Prix Guide
« BACK 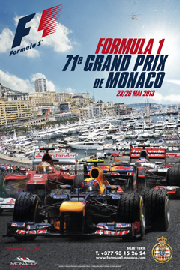 Monaco's challenges are many and varied - racing within the tight confines of the Principality, drivers are very light on areas they can afford to make a mistake, and there's absolutely nowhere you can make a big error and get away with it. As well as a confined, barrier-lined circuit, the drivers have to contend with a track surface that is far from ideal, for having been used as public roads throughout the year there is usually a 'cleaning' process that takes place throughout the weekend, as all the muck and rubbish deposited by the road cars of Monaco's millionaires is replaced by a layer of Pirelli rubber.

In terms of setup, cars run relatively soft in order to cope with repeated elevation and camber changes and several bumps which can unsettle the car. Downforce levels are as high as possible and the cars will be geared very short to maximise acceleration, as the cars won't hit their theoretical top speed at any point on the track before having to brake for the next corner.

It may comes as a surprise that Monaco is one of the gentlest circuits on tyres - this is because there are no high speed corners to speak of, so the latitudinal wear on the rubber is much less pronounced than at circuits like Barcelona, where there are long, sweeping corners to put the tyres under stress. As a result Pirelli are bringing the two softest compounds in the range, the Super Soft and Soft, which ought to translate into two-stop strategies with one-stops also possible if conditions permit.

Monaco 2012 ended up being a classic one-stop race for most, although the variation in tyre compounds meant there were opportunities to make up ground on those who started ahead. Pre-race, strategies were based around stopping twice but the tyres lasted much better than expected and the threat of rain around lap 30 forced everyone to stay out as long as possible, to avoid having to make a second stop for rain tyres.

In amongst this, Sebastian Vettel was turning in strong laptimes on the soft tyre, moving up through the field and forcing everyone to react by going to a definite one-stop, lest they hand the lead to the German without a guarantee that they could re-pass him on the tight Monaco circuit. This forced Webber and Rosberg to manage lengthy stints on the soft tyre, covering 49 and 51 laps respectively to the flag, while Alonso made up two places through effective tyre management but also could have won with a somewhat risky gamble by staying out for a couple of extra laps at the time of his stop on lap 30.

At that point Rosberg, Hamilton and Webber were all setting quick times on the soft tyres immediately after their stops, which would have looked to Ferrari as if leaving Alonso out would guarantee him to be behind all three. However in the following laps their laps dropped off to the high 1m 23s, which would have given the advantage to Alonso had he remained on track. As it was, Ferrari took the right decision and slotted him into third place, with the possible failure of that decision meaning fifth at best and little chance of being able to overtake.

With three pole positions in the last three races, Mercedes could again line up first and would be better-placed to maintain position around the twisty Monaco circuit, as opposed to falling backwards as they did in China, Bahrain and Spain. Teams that are kinder to their tyres will hold the trump card, as they can pit earlier, and run longer on their second set of tyres whilst maintaining competitive laptimes, passing their competitors when they stop for tyres. This is a ploy that might give Lotus and Ferrari a platform for victory, especially if the Silver Arrows again take the front row and drop back with the high tyre wear that has become a characteristic trait thus far. Safety car deployments are regular occurrences - the statistics say there's an 80% chance it will appear at some stage in the race - and a crash at the right (or wrong) time can turn a race on its head. Overtaking is very hard - DRS only features once here, on the start/finish straight - and makes only a 10km/h difference to the top speed of the car behind, meaning any overtaking move requires a fair degree of compliance from the man in front.

Who has the best record in Monaco?

Back-to-back wins in 2006 and 2007 along with consecutive podium finishes in 2011 and 2012 mean Fernando Alonso is statistically the most successful active driver at Monaco, but Mark Webber is running him close thanks to twin victories in 2010 and last year, added to a third place during his first season with BMW Williams in 2005. Sebastian Vettel has the best average finish of the current grid with 3.0, but he has contested only five races and all of those were in top-line machinery while the likes of Webber, Alonso and Button have all driven uncompetitive Minardis and Hondas. World Champions Kimi Raikkonen, Jenson Button, Vettel and Lewis Hamilton all have wins under their belt in the Principality. Hamilton's 2008 win came a year after he could have made Monte Carlo the venue for his debut victory, but was forced to hold station behind Alonso. A year later, he won a wet-dry race full of incident to move into the lead of the Driver's Championship.

Low wear levels led to a one-stopper for all the points scorers last year, with Nico Rosberg eking 51 laps out of his soft Pirellis on the way to second place. This year might see a mixture of one and two-stop strategies, with the success of each depending on being able to run in clear air.

Despite the ban on winglets and flaps to generate extra downforce, teams go to the extent of designing a custom aerodynamic configuration purely for use in Monte Carlo, to make as much downforce available as possible.

Close barriers and the city setting maintain the impression of speed, but Monaco has the lowest average lap speed of the whole season.

Practically no runoff area, an undulating circuit with a couple of blind corners and a low grip track surface combine to make Monaco an incredible challenge to get right - but the most satisfying when you do.

As hard as it gets in modern F1. Monaco, along with Suzuka, are the only circuits where one DRS zone will feature this year and even the convergence of drivers on different strategies won't automatically mean the man with newer tyres will breeze past. The best chance is on the run down to Turn 11 after the tunnel.

Monaco is the ultimate motorsport experience, with the cars hurtling past so close it feels as if you are in the cockpit yourself. The sound of 22 V8 engines at 18,000rpm reverberating and bouncing off the walls is one of the great sounds of modern motorsport, and the harbour adds a liberal dash of glamour to proceedings.

"It’s a special place for sure. I’ve always liked street races and Monaco is the best street circuit of them all. There’s no room for even the smallest mistake and that’s why it’s different to other tracks. You have to give the walls so much respect and build up your speed. More than anything it’s a test of your mental strength because you keep your concentration for nearly two hours during the race."

“In Monaco we’d expect an average of two pit stops per car, because in complete contrast to the last race at Barcelona, Monaco has very low tyre wear and degradation. This doesn’t make the race any less strategic however, as in the past we have seen drivers trying completely different strategies yet ending up very close to each other at the finish. The last race in Spain was won from lower down on the grid than it has ever been won before, so it will be interesting to see if this pattern can repeat itself in Monaco: a track that is renowned for being difficult to overtake on. Because of this, strategy will become even more important than usual, with teams trying to use tactics to improve on their starting positions.”