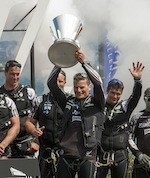 The Kiwis beat Italy's Luna Rossa in the first of two scheduled races yesterday on a fog-bound San Francisco Bay to take an unbeatable 7-1 lead in the best-of-13 challenger series.

It’s the fifth time in the past six editions of the America’s Cup that two-time champion Team New Zealand will vie for the trophy. Oracle’s 2010 victory returned the cup to the U.S. for the first time in 15 years. The best-of-17 title series on San Francisco Bay is scheduled to begin Sept. 7.

“We’ve come here to win the America’s Cup, so winning the Louis Vuitton Cup is all part of the preparation,” Team New Zealand skipper Dean Barker said on the series website. “The guys are extremely focused. We came short in Valencia in 2007 and we’ll give it our all now in the next few weeks to make sure we’re as ready as can be.” Team New Zealand led by about 200 meters (650 feet) after the first mark and by 700 meters as it headed through gate two yesterday. By the time the Italian team reached the third gate, near the Golden Gate Bridge, it trailed by 2 kilometers and almost three minutes.