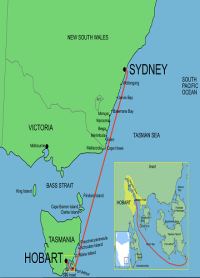 Celebrated yachtsman Iain Murray is predicting a torturous mental challenge for crews in the Sydney to Hobart.

A revised weather forecast for the race has altered predictions of a possible race record to the chance of a yachting lottery due to a lack of wind.

Due to the forecast shifting and weak weather patterns, yachting meteorologist Roger Badham has pointed to the possibility that the first yacht to finish could be up to 10 hours outside Wild Oats XI's race record of one day, 18 hours, 23 minutes and 12 seconds set last year.

And former Olympic and America's Cup sailor Murray, says a game of chance on the open seas could result.

"The only thing for certain is that the start and finish will be relatively easy," said Wild Oats XI's tactician Murray.

"What's in between will be far from that. It's going to be bloody tricky - more like mental hell. The race weather forecast for the waters off the Tasmanian coast indicate just one thing - a minefield."

Murray said competitors just miles apart could likely experience vastly different racing conditions and as a result will have to take a number of risks in order to enjoy victory.

"There is no doubt this year's race is going to be an enormous mental challenge - much more so than last year," Murray said.

"We are going to see an extensive variation in sailing conditions, which means it will be a race where you will have to take well calculated risks and string a whole lot of them together successfully if you are going to be first to Hobart."