Ship Loaded with Marijuana Burns Across the Med 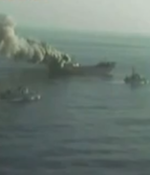 Smugglers shipping 30 tonnes of hashish resin across the Mediterranean - with a street value of 40 million euros (£33.8m) - created a massive drifting cloud of marijuana fumes after setting fire to their illicit cargo as police moved in to arrest them.

After setting fire to the drugs, which burned at 1,600 degrees celsius and gave off a thick plume of grey and white smoke, the nine Syrian and Egyptian crew members of the cargo ship leaped into the sea off the coast of Sicily before they were picked up by Italian tax police vessels.

Acting on a tip, police had been monitoring the Gold Star, which was sailing under a Tanzanian flag, for three days, before sending in boats and aircraft to apprehend the suspicious vessel.

But if the smugglers were trying to destroy evidence, the attempt failed.

"Setting fire to the cargo and then jumping in to the water, far from the coast, is something we've not seen in 30 years," said a police spokesman. "It was very strange behaviour and we are trying to figure out what exactly made them do it."

The vessel continued to sail unpiloted for four hours before police could board it and try to extinguish the burning hash.

"It burned for 24 hours before it was finally put out," said the spokesman. "The drugs were tightly packed into the living quarters at the stern of the ship, leaving the cargo hold open and empty, perhaps to allay suspicions."

By the time the fire - which destroyed the stern of the ship - was put out, only some of the 30 tonnes remained intact. "What we recovered was only a small portion but even that measured four metres, by two metres by 1.5 metres," said the spokesman.

"The officers who boarded the ship needed to wear gas masks to avoid being overcome by smoke," he added. "And now they will need to stay away from our sniffer dogs until they have had a good shower."