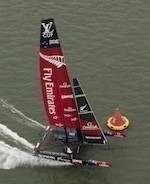 There’s a difference between actual racing and in-house racing. That may be a critical component when the America’s Cup finals begin Saturday. At least that’s the way local sailing expert Zach Berkowitz sees it.

A former weatherman on San Francisco TV, Berkowitz won the International 14-foot championship in Bermuda in 2001 on a two-man trapeze boat and helped develop the first adjustable wings on rudders.

Pressed to give a prediction, he said he thinks Team New Zealand will win 9-4, although he’d like to see Oracle prevail and keep the Cup competition in San Francisco for another cycle. ”I think Oracle’s initial designs were off the pace, and they have been playing catchup up to this point. The question is: Have they been able to leapfrog the Kiwis?”

The Kiwis used the Louis Vuitton Cup round-robin and finals to polish their maneuvers, giving them an advantage in that area, he said. Oracle has 24 sailors, many of whom have been rotating between two boats in practice. “You don’t know who’s working with whom,” Berkowitz said. When it comes time to race for real, he said, ”the Kiwis want to get Oracle into a jibing duel.”

Although Oracle skipper Jimmy Spithill is known for his aggressive starts, New Zealand skipper Dean Barker has been sharpening his prestart work in races that count, Berkowitz points out. Meanwhile, Spithill and Ben Ainslie, skipper of the other Oracle boat, have had to be very careful in their in-house prestarts; one collision could take not just one very expensive boat out of the competition, but two. “That’s the flaw of in-house racing,” Berkowitz said. “You don’t take chances.”

New Zealand had a scary but fruitful experience when it nosedived early in the challenger finals against Luna Rossa. Two sailors were washed overboard (but not seriously hurt) as a gust hit the boat on a bearaway. The Kiwis reacted quickly to save the boat, but the bigger issue, according to Berkowitz, was that their boat was very stable because of the way the bottom of the boat is designed. It has greater volume in the bottom of its hulls than Oracle, so it’s better equipped to avoid a pitch-pole, he said.

The smoothness in how the Kiwis’ crew and boat handled it was “impressive, Berkowitz said. “A lot of people wonder if Oracle could have come out of that nosedive,” he said. “It probably would have ben a disaster for every other boat but Luna Rossa,” he said.

That’s because the Italians bought the design of the Kiwis’ first boat; New Zealand is using a second, much more advanced version.

In practice against Luna Rossa the other day, the Kiwis came out with Formula 1-style spoilers on the aft crossbeam. It might have been a way to slow the boat and even the competition with the Italians, some onlookers thought. Berkowitz thought it was gamesmanship.

“All eyes are on the Kiwis,” he said. “If I were them, I’d be playing games too. They have a good sense of humor.”

When the AC72 were being designed, Oracle “thought they had the edge,” Berkowitz said. The boats were originally designed not to foil, but the Kiwis quickly showed they could foil anyway. So the game changed. “Everybody else had to catch up,” Berkowitz said. “The question is whether Oracle has caught up.”