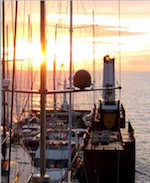 Sevenstar Yacht Transport in the Netherlands has announced new sailings returning to the Caribbean after the summer season in October and November this year.

Estimated loading in Tivat from 20th October to 5th November 2013 will call at ports in Tivat, Genoa, Palma de Mallorca, St Thomas in the USVI, and Palm Beach, Florida.

Estimated loading in Genoa between 20th November and 5th December 2013 will be calling at the ports of Genoa, Palma de Mallorca, St Thomas, USVI, and Palm Beach, Florida.

Richard Klabbers, managing director, comments: “With in excess of 200 yachts being shipped in the last four months from Florida and the Carribean to Europe, we can look back on the most successful summer season in Sevenstar history."

The 2014 yacht transport schedule includes sailings starting in March, April and May back to the Med, with ARC Rally 2013 participants being able to be moved back to Southampton in May 2014.

Headquartered in Amsterdam, Sevenstar Yacht Transport has over 25 years' experience in the industry. The company is part of The Spliethoff Group, which has its own fleet of more than 100 independent carriers.