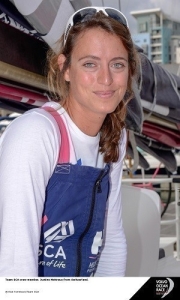 SCA  has today confirmed that Sally Barkow (USA) and Justine Mettraux (SUI) will be joining the all-female team for the 2014-15 Volvo Ocean Race.

From hundreds of applications some 35 women have been invited to take part in month-long trials at the team’s base in Lanzarote, Spain. Each candidate has to go through a rigorous training and physical programme as well as sailing onboard the team’s Volvo Ocean 65.

“Finding people with the right mix of physical strength, sailing skills and personality is no easy task - even in a traditional all-male team,” comments Team SCA coach Joca Signorini, himself veteran of three Volvo Ocean Races. “It is really important that we take our time to secure the best possible squad of women to take on this race. I have been incredibly impressed so far and am very happy with how the team is shaping up.”

Sally Barkow (33) has been on and off the Olympic circuit for the past 10 years and competed for the US team in the Beijing Olympics in 2008. A skilled match racer, she has been with Team SCA for the past few months.

“This is definitely really exciting. I feel that SCA is providing an incredible opportunity here to compete on an equal level with the other teams in this race. There are only nine months left to the start, so we are really now on the home straight and have everything to train and play for,” comments Barkow. Justine Mettraux (27) joins the team fresh from competing in the Mini Transat, where she finished in second place, a position that secured the best performance by a woman in a Mini Transat series boat in the event. (The Mini Transat is a solo transatlantic yacht race on small 6.5m boats that starts in France and ends in the Caribbean.)

She has been part of the Mini circuit in Switzerland and since 2012 has been regularly appearing on podiums. She was also part of the successful Team SCA squad for the Fastnet Race, coming in at the last minute to replace an injured colleague.

“For me this is a great opportunity, and I couldn’t wait to get back to Lanzarote and join the Team SCA training program. I hope that my Mini Transat experience will stand me in good stead and it is great to be sailing with such a strong team of women,” comments Mettraux.

Team SCA is now back training in Lanzarote after Christmas and New Year break. The team will continue its two-boat testing program as this has been very successful to date and allows the coaches to further develop the training programs.

There are number of longer offshore races planned for the first half of the year before the team moves base to Alicante in preparation for the start of the Volvo Ocean Race in October.