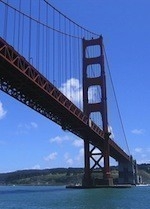 SAN FRANCISCO – A Santa Cruz sailing crew rescued a man who jumped from the Golden Gate Bridge on Monday, delivering him safely to Coast Guard officials.

Scott Walecka, 56, of Santa Cruz, was taking his 38-foot vessel Animal to San Francisco to prepare for Friday's Spinnaker Cup race from the city to Monterey when his daughter, 23-year-old Hilary, said she saw a person jump from the fabled bridge shortly before 2 p.m.

Moments later, the pair and sailing friend John Mizell heard a Coast Guard radio call for a jumper in the water near the San Francisco end of the span. Walecka saw the man bobbing underneath a California Highway Patrol helicopter and sailed toward him.

"He was alive and wanted to be rescued," Walecka said after returning home late Monday. "We threw a life sling out to it. He grabbed on to it, and he was hand-over-hand on the rope to get to the back of the boat."

That's when Walecka realized the man's legs appeared to be broken. The man, who authorities say is 31 and identified as homeless, told the sailors he was from Alabama.

The tattooed man was wearing a shirt, shorts and appeared to be in strong physical condition.

Walecka said Mizzel, who is 30 and trained is mountain rescue, talked to the jumper to keep him from going into shock. Walecka said the man didn't seem capable of saying much, including thank you.

"He was just in pure survival mode at that point in time," Walecka said.

California Highway Patrol officer Peter Van Eckhardt said the first call of a person over the bridge's railing came at 1:45 p.m. and four minutes later he was seen in the water. The Santa Cruz sailboat picked up the man at 1:54 p.m.

Escorted by a 47-foot Coast Guard vessel, the Santa Cruz sailboat delivered the injured man to a Coast Guard station in Sausalito, where he was treated and then transferred to Marin General Hospital, authorities said. The full extent of his injuries was not immediately known.

It's rare for jumpers to survive the 220-foot plunge off the Golden Gate Bridge. The bridge's governing body hopes to complete a design for a suicide barrier.

Walecka is glad he was in the right place at the right time Monday.

Walecka owns Animal with Santa Cruz area residents Matt Lezin, Craig French and Tom Akrop. Walecka, who rented a car to get back home Monday, said he and Lezin still plan to participate in Friday's race from San Francisco to Monterey.