Yachting News » Of Interest » Beware: Robot Container Ships are on the Way
« BACK

Beware: Robot Container Ships are on the Way 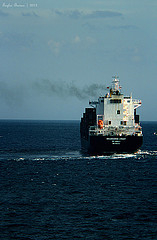 The cruising sailor’s worst nightmare: there’s nobody on the bridge, the officer ‘on watch’ is in a call centre ashore.

EU funding into remote-controlled container ships that will traverse the  world's oceans without any crew have been slammed as ‘mad' by the RYA.

The ships, almost a quarter of a mile long and wider than a motorway could be  trading from Singapore to Southampton within a decade.

Rolls-Royce, the British engineering company developing the ships, claims the  unmanned ships will be cheaper, greener and safer than those with a full  complement of captain and crew.

Oskar Levander, Rolls-Royce's head of marine innovation and technology, said:  ‘If you look at most accidents in marine they are happening because of human  error - a lack of concentration and people becoming tired. We can provide a  safer, more comfortable and better way of steering a ship.'

But Stuart Carruthers, cruising manager of the RYA, says this overlooks the  fact that there are thousands of other users out at sea who may not be seen by  the robot ships. ‘I have heard of this mad idea and it is true - they probably can operate  remote-controlled ships, but that completely ignores other legal users of the  sea.

‘You could programme the algorithms of these ships to fit the Colregs, but to  put sensors on the ship that recognise small craft under any circumstances is  another matter. Radar often cannot pick up yachts and even when it can, these  leviathans will not be able to get out of the way in time. It's the  sophistication of the decision-making process that worries me. Doubtless it's  possible to send ships from Singapore to Southampton on remote-control but what  would be the destruction left in their wake?'

Levander said marine technology had progressed so fast in recent years that  most of the control of ships was already automated, relieving captains of many  of their traditional duties for large parts of long voyages.

He said most of the captain's duties today concern managing the crew and  bureaucracy.

Under Rolls-Royce's plan captains will be relocated from the bridges of ships  to office blocks akin to air traffic control centres in London, Singapore or  Oslo, from where they will control fleets of ships on big screens.

‘Maybe a captain can operate 10 ships... it might be easier to have a pool of  10 captains in control of 100 ships,' said Levander, a Finn working at  Rolls-Royce's Blue Ocean research centre in Ålesund, Norway.

These armchair captains will watch ships crossing a computer screen until  they approach port, which is when a full bridge simulator with 360° views, will  take over.

Levander brushes aside concerns that the ships could pose a danger to other  seafarers. ‘We have drone aircraft flying, we have [drone] helicopters, we have  Google cars - these are situations where you need to react in a fraction of a  second, with ships you have a lot of margin.'

The technology, which will be tested on a real ship off the coast of Ålesund  in the next few months, will be used only on bulk cargo vessels and not  passenger ships.

Approval will have to come from the International Maritime Organisation  (IMO), the global regulator of shipping. But Levander reckons that in time, more  than half of the world's bulk cargo ships will become remote-controlled, with  container ships following later.

The EU is funding a £3 million study into remote navigation.