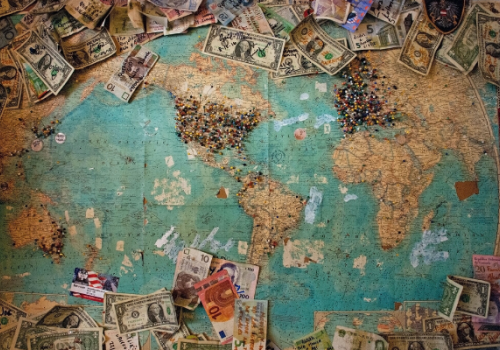 Whilst global data is weak, Eurozone PMI data last week showed immense weakness across the board, and as such, the euro found itself under pressure, with economists at TD Securities saying: “The EUR will face rising headwinds from a combination of a dire growth outlook, rising political tensions and a deteriorating capital flows backdrop.”

Data from Germany and France reinforced a negative sentiment, with record contractions in manufacturing from both nations.

On Friday May 1, President Trump re-ignited Sino-American tensions with the threat of new tariffs on China. His statement pushed stocks immediately lower and if they are implemented will strain international trade even further. This tension led to demand for the USD, but this week’s key events will be Tuesday’s ISM Manufacturing data and key employment data published on Friday afternoon.

Standard Chartered says of the US economy: “We expect the economy to contract by 5.4% in 2020 (previously -2.8%). With most states planning to maintain restrictions until the first or second week in May, and certain restraints remaining in place through Q2, economic activity will likely stay subdued.”

GBP: Brexit negotiations will add another layer of uncertainty to GBP in the coming months. As well as the effects of COVID-19, Brexit headlines will add vulnerability to GBP across the board. Economists at Rabobank see GBP/EUR trading around 1.13600 or lower over the coming three months, with the majority of the risk towards a down-move.

Deloitte published the findings of a survey, saying that risk appetite amongst the nation’s CFOs is at its lowest since 2008 – 58% of CFOs are less confident and they expect revenues this year to be 22% below pre-virus levels. Not a great way to enter the final eight months of Brexit negotiations!

Thursday’s raft of announcements from the Bank of England will be carefully watched – the data (along with the new Governor’s speech) has been brought forward from midday to very early in the morning, giving FX markets a reason to get going.

AUD: The Central Bank is expected to hold interest rates steady at its meeting on Tuesday 5th May – at a record low of 0.25% after two rate cuts in March. As Australia seems to have weathered the storm, the AUD will likely benefit from a domestic recovery, and that of China – its biggest regional trading partner. After a rollercoaster first quarter, AUD is steadily recovering – but even this may not continue if trade wars are re-ignited between China and the US.

The extent of the US-Sino spat will be closely watched, along with hard data which will now show the full impact of COVID-19.