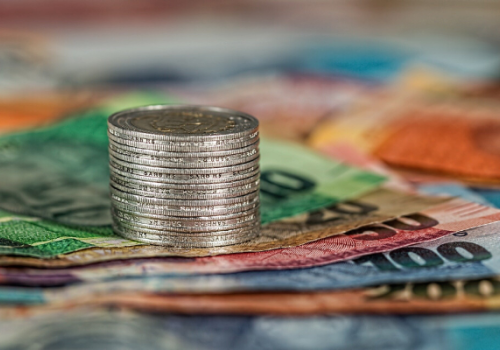 In relatively unsurprising news, The Eurogroup meeting has failed to reach agreement on a co-ordinated policy response to Covid-19. They will meet again tomorrow, 9th April, for further discussions. The euro weakened on the news, and EUR/USD fell back after yesterday’s rally, trading around 1.0850 (middle of recent ranges).

Currency markets have calmed down somewhat:

There are plenty of statistics and guesses around, trying to predict the depth of the economic downturn and its after-effects.

The Bank of France has produced some interesting statistics:

Former Fed Chair Ben Bernanke added that the US economy “could contract by 30% or more in Q2 2020.” Although not substantiated, he is a well-respected individual – his voice will be heard.

Reuters Polls ‘worst’ predictions are that Japan’s economy contracted 5% (Jan-March) and 10% (April-June). Economists are predicting further easing of policies to counter this. The ECB has already loosened its rules on acceptable collateral, and we can expect this from most economies. Such action, along with inevitable economic growth reduction, will lead to downgrades from Ratings Agencies. The UK has seen its credit rating cut, and S&P downgraded ratings/outlook the ‘Big Four’ banks in Australia overnight.

We will see sovereign credit downgrades across the globe – this is not in doubt. What will be interesting is the relative extent of downgrades. S&P, Moody’s and other ratings agencies, which took some blame for the sub-prime crisis of 2007/8, will again have a front-line role to play in deciding the relative strength of sovereign and corporate credit-worthiness.

The US Fed will also publish the minutes of the last emergency meeting, held on Sunday March 13th. The Fed had already cut rates by 0.5% in its last meeting. The minutes of the 13th March meeting will be interesting (the Fed met on a Sunday and cut rates to 0 and announced USD 700 billion of quantitative easing) due to the context of the meeting:

It remains to be seen whether this emergency meeting was a turning point in the economic reaction to this crisis – the sense of panic and knowledge of the potential threat, will be clear from these minutes.