Yachting News » Of Interest » Port Said Swept By Lawlessness
« BACK 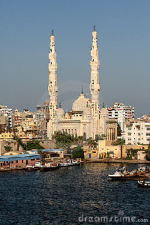 Port Said, Egypt - Egyptians from all walks of life once flocked to the markets and beaches of Port Said. Businessmen rubbed shoulders with factory workers, browsing through piles of imported tax-free goods. Families from around the country strolled along the promenade and lounged on the shores of the Mediterranean Sea.

Now, the streets of this Suez Canal city are empty. Most of the stores are shuttered, and the few that remain struggle to survive.

Frequent reports of crime and violence have driven visitors away and merchants see little foot traffic. Cruise ships that used to stop to refuel and unload thousands of passengers have begun to skip the stop entirely. Restaurants and cafés that catered to tourists are struggling to stay afloat.

Because of the absence of security forces, Port Said is undergoing deep economic and cultural changes.

Problems with the city's police force have been exacerbated after Egypt’s revolution. Port Said's security situation worsened in January after a court upheld death sentences handed down to 21 football fans accused of instigating the deadly stadium riot last year in the city. More than 70 people died after rival fans clashed, with many people crushed trying to escape the stadium violence.

The January verdicts led to protests in Port Said that left about 40 people dead, most of them shot by police. Families of the defendants in the case stormed the prison where their relatives were being held, and President Mohamed Morsi declared a state of emergency and sent in army troops.

Since that time, the presence of security forces on the streets of the city has largely been absent.

Increasing prices and unemployment, particularly among youth, combined with an unwieldy justice system, have made the crime problem worse. The national police force, stern and heavy-handed under former president Hosni Mubarak, is widely viewed now as absent, inefficient and undisciplined.

Some Egyptians have begun to take the security situation into their own hands. Weapons possession among small business owners and families has risen, a city police official told Al Jazeera on condition of anonymity, because he wasn't authorised to speak to the media. He was unable to provide figures, however.

"The fact is that guns are increasing in Port Said now," the official said.

In Port Said, disputes among residents are increasingly being settled on the streets.

"We don't want to live in a world of animals," said Mahmoud Aboudina, a clothing store owner. "Now, having a gun is like having a cellphone."

Mohamed Samaha, owner of a small pharmacy in Port Said, recently had his store robbed by three masked men. He went directly to the local police station to report the crime.

"They told me there is nothing they could do," Samaha said. "Now I never deal with the police. We are on our own."

The looting of police stations during the revolution supplied illegal weapon dealers with a stock of small firearms, while the recent war in Libya and the ensuing political instability there has resulted in a steady flow of assault rifles passing over the border and subsequently transported throughout Egypt.

Dealing in the weapons trade has become a viable profession for many in Port Said.

Sayed, a women's clothing store owner who gave only one name, turned to arms dealing after his store became economically unviable. "Before the revolution, the biggest thing you could have is a pocket knife. Now, I know seven people with an FN MAG [a Belgian-made assault rifle]," he told Al Jazeera.

"It's normal for people who lost their business after the revolution. What else would we do but sell weapons?"

In Port Said, gangs have been able to ransack the city's ample stocks of merchandise because of the deteriorating security situation and the greater number of available weapons, business owners and the police official told Al Jazeera.

When a group of armed men was spotted at Ramadan El Bassouni's small storage unit on the outskirts of Port Said, he gathered several of his relatives and headed down to the site to confront them. The thieves backed down without a fight, but were able to leave with $10,000 of Bassouni's merchandise.

"All businessmen have a story like this," Bassouni said. "And we never call the police."

Located at the junction of the Mediterranean Sea and the Suez Canal, Port Said holds a key position in Africa's trade routes. Ships pass through every day to load and unload tonnes of cargo, ranging from automobiles to medical supplies to clothing. But now, the port has become ripe territory for thieves and smugglers.

"When a shipment arrived before, police would provide an escort. Now, they do nothing, and our stocks are being stolen," said Bassouni. Without a police escort, thieves are able to hijack trucks with relative ease, he said. The merchandise is then smuggled out of the city to be sold in markets in Cairo and other cities, or ransomed back to the owner.

Port Said is famous among Egyptians as the country's "free zone", where imported goods, particularly clothing and cosmetics, are sold tax-free within the city. When merchandise is transported outside city limits, however, the government charges sales taxes.

Port authorities were previously stationed at the entrance of Port Said to combat rampant abuse of the system. Since these security measures are now absent, smugglers have free reign to move merchandise from the city to the rest of the country.

Merchants who used to purchase goods from Port Said through legal channels have now turned to smugglers to avoid paying hefty sales and import taxes. "Before, we used to move one or two pieces per shipment," a clothing importer involved in the smuggling trade said. "Now, we can move whatever we want."

Many owners have turned to smuggling after the security crisis chased away legitimate businesses from the city. "I don't want to be working like this," the clothing importer, who declined to be named, admitted. "But I have to. It's the only way now."