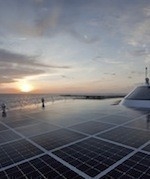 PlanetSolar's M/S Tûranor is taking on the high seas again, this time on an Atlantic and Caribbean tour as part of a data-collection effort.

Having proven her point, that 'sailing' around the world with solar power is possible, Turanor PlanetSolar is off on another adventure, this time to take a series of ongoing physical and biological measurements will be taken of the water and of the air in the Gulf Stream. As she is powered by solar energy, the vessel will not emit any pollutant that might skew the data collected.

The purpose of the exercise is to study key parameters of climate control, particularly atmospheric aerosols and phytoplankton. But first, she has arrived in Rabat in Morocco, much to the delight of the locals, in preparation for trying to break her own Transatlantic speed record.

Thanks only to photovoltaic power, the world's largest solar boat has crossed the 1,600 kilometres separating La Ciotat (France) and Rabat (Morocco), the first port of call for the 2013 PlanetSolar campaign. Thanks to support from the Bouregreg Marina and the Swiss Embassy in Morocco, events dedicated to local authorities and children will be held aboard the MS Tûranor PlanetSolar. Then, the boat will be prepared to repeat its transatlantic crossing during which it will attempt to break its own speed record and then to begin the scentific expedition along the Gulf Stream. Stopover from 16 April to 20 April 2013.

Departing from La Ciotat (France) on 8 April, the solar vessel crossed the Mediterranean then to cross the tricky Strait of Gibraltar, along the African coast and finally to reach Rabat, the capital of Morocco on 16 April. After some nine days at sea, Captain Gérard d'Aboville drops anchor at the Bouregreg Marina in the heart of the Moroccan city, happy to reach the end of the first 2013 sailing: 'we faced many challenges during this stage, as it's the first time since its maintenance service that the boat was able to sail the high seas longer than 24 hours, under difficult conditions at times. This is what particularly led us to realise how well the boat handled! Reaching this stage and arriving at Rabat is the first success for the 2013 campaign.'

The arrival of the world's largest solar boat is also a source of joy for Rabat. To organise its arrival, PlanetSolar was able to count on support from both the Bouregreg Marina and the Swiss Embassy in Morocco. With Morocco and its extraordinarily visionary solar plan, this is about drawing together the capacity to meet the immense challenge of producing renewable energy'. This stopover in the Kingdom of Morocco will give PlanetSolar the opportunity to meet the media and local authorities to introduce them to the solar catamaran and its next missions at which time it will demonstrate its practical uses.

Furthermore, PlanetSolar will continue to distribute its message in favour of renewable energy and more particularly to the young generations, by welcoming on board several school classes from the Rabat region. It will revolve around introducing the children to the solar vessel and making them aware of climate issues. The departure is scheduled for 20 April.

For the MS Tûranor PlanetSolar and her crew, Rabat will also be the departure point for one of the longest non-stop sailing segments of the 2013 campaign, crossing the South Atlantic. A route already sailed in 2010 during the Around the World which earned PlanetSolar its first entry into the Guinness World Records for the fastest transatlantic crossing by a solar boat, ie 26 days 19 hours and 10 minutes. This year, the MS Tûranor PlanetSolar will reach the island of St. Martin (the French side of the island) by trying to break this record.

'PlanetSolar DeepWater', the scientific expedition on the trail of the Gulf Stream:

From May to August 2013, the crew led by Professor Martin Beniston, climatologist and director of the Institute of Environmental Sciences at the University of Geneva, will sail along the Gulf Stream ocean current, one of the most important regulators of the European and North American climate, thereby covering more than 8,000 kilometres from Miami (US) to Bergen (Norway) passing through New York (US), Boston (US) and Reykjavik (Iceland).

The objective of the scientists is to understand the complex interactions between physics, biology and the climate, which will eventually refine climate simulation, particularly linked to energy exchanges between the ocean and the atmosphere. Moreover, the project will make the public aware of climate issues through the development of activities and educational resources.