Yachting News » Of Interest » PlanetSolar Back at Work
« BACK

PlanetSolar Back at Work 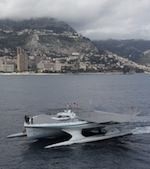 A sleek, 102-foot catamaran covered with silver solar panels that make it look like a Star Trek set captured the world’s imagination as it circumnavigated the globe powered only by the sun.

The 584-day, 37,000-mile journey ended a year ago in Monaco with mission accomplished: To demonstrate the efficiency and reliability of solar power and the importance of renewable and clean energy sources.

Now owners Raphael Domjan, a Swiss eco-adventurer, and Immo Stroher, a German businessman and solar-technologies advocate, have launched the $19 million MS Turanor Planet on a new voyage: A scientific expedition headed by a climate change expert with a Nobel Peace Prize to his credit.

“It’s a good second life for the boat,” said the captain, Gerard d’Aboville, who, as the first person to cross two oceans solo in a rowboat, knows something about alternative energy.

The three-month expedition, with stops in New York, Boston, Newfoundland and Iceland, began last week in Miami Beach and will end in Bergen, Norway. It will mostly follow the Gulf Stream, one of the most important regulators of European and North American climates.

Climatologists, physicists and biologists are using advanced instruments to collect continuous measurements of the surface air and the water to a depth of about 15 feet. The data will help them understand the complex relationship of ocean, atmosphere and climate.

“We are looking at the whole sequence, from the warmest parts here in Florida through to the coldest parts up north of Iceland,” said Nobel laureate Martin Beniston, director of the Institute for Environmental Sciences at the University of Geneva in Switzerland. “We’re looking simultaneously at physics, chemistry and biology, while most targeted scientific expeditions look at one specific set of mechanisms in one part of the ocean only.”

With “zero emissions, no diesel fumes,” the solar-powered catamaran is ideal for this type of research, Beniston said.

The ocean releases large quantities of aerosols (tiny liquid or solid particles) that can be either chemical, like salt, or biological like phytoplankton, which contain chlorophyll and need sunlight to live. One cutting-edge instrument aboard, the Biobox, can instantly determine the aerosol’s makeup.

“The Biobox sucks the air in a little bit like a vacuum cleaner,” Beniston said. “The laser counts one by one the aerosols that come through according to the light that is emitted when the laser burns the aerosol. Then we know the composition biologically and chemically.”

That knowledge is important because the interaction of phytoplankton with the ocean and atmosphere acts as a “huge carbon pump.”

The “exciting part” of the voyage, Beniston said, won’t begin until the MS Turanor PlanetSolar reaches northern waters with their frequent eddies, which break off from the main current and bring energy and nutrients to parts of the ocean that don’t regularly get them.

“We know broadly how the Gulf Stream functions,” Beniston said. “But some of the smaller-scale features, the eddies, are still fairly mysterious.”

Scientists do know there are warm-water and cold-water eddies, and that the cold ones have greater biodiversity and potential to fix carbon. Cold-water eddies also help cool the atmosphere.

“But we’ve got two specific questions,” said Christel Hassler, a marine bio-geo chemist at the University of Geneva. “What is the signature of the eddies and can we see a correspondence between phytoplankton and biological aerosol? And, beyond Iceland, what are the characterization of the areas where water sinks to feed global water circulation?”

Scientists have been concerned that global warming may be disrupting deep-water formations in ways that could slow the Gulf Stream, which acts like a conveyor belt.

A decade ago, some theorized that if that happened, the Gulf Stream “would peter out somewhere between here and New York,” Beniston said. “That could actually bring back fairly cold conditions on both side of the North Atlantic because it would not be bringing up as much heat from the Caribbean.”

Recent research suggests that while that theory is plausible, it’s unlikely to happen this century. “The Gulf Stream seems to be more robust than what we anticipated maybe 10 or 15 years ago,” Beniston said.

In 2007, as vice president of the Intergovernmental Panel on Climate Change, Beniston shared the Nobel Peace Prize for the group’s report on global warming.

While the report’s fundamental findings — that human activity is disrupting the climate — are holding up, Beniston said the alarmist nature of some news reporting about climate change has been “a bit of an overkill.”

He cited Hurricane Sandy, which in October flooded the New York subway system for the first time.

“So many people pick up on an extreme event which may or may not have anything to do with climate change,” Beniston said. “It could be a one-off. But if you have maybe 10 hurricanes that follow each other each year, that may be climate change. But even that brings home the message that weather and climate can already do a lot of damage.”

The knowledge gleaned from this expedition will provide additional pieces to a complex puzzle, he said.

“I think it is time to come back to real science-based information, saying this is the state of knowledge and it’s probably not perfect. And scientists also need to have some humility in respect to the very complex system and communicate what they know.”