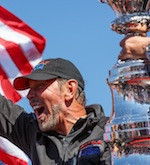 SAN FRANCISCO – Now that Oracle Team USA has improbably retained the 34th America's Cup, what can Larry Ellison & Co. do for an encore?

Oracle's billionaire bankroller has many questions to answer in the weeks ahead after his team, under the never-say-die skipper Jimmy Spithill, staged the greatest comeback in 162 years of the competition.

Trailing 8-1 a week ago, Oracle sailed away from Emirates Team New Zealand by 44 seconds on Wednesday to retain the Auld Mug, the oldest trophy in international sports, in a winner-take-all finale on San Francisco Bay.

The American-backed team won eight consecutive races to win 9-8 in the first-to-nine series.

But in the oddity that is America's Cup, Oracle, the defender, gets to more or less call the shots for the next edition in three years.

What venue? What class of boat?

Will organizers stay with a multihull configuration or return to monohulls of the past? If they go with multihulls, will they stick with soaring 7-ton yachts fastened with 131-foot carbon fiber sails or something less imposing?

One thing seems certain: The 35th Cup will aim to cut costs to encourage more participants. In 2007, the last full Cup, there were 11. This year the $100 million cost of mounting a challenge meant only teams from Italy, Sweden and New Zealand showed up.

"They are too expensive," said Grant Dalton, general manager of the partially government-funded Kiwi effort and a longstanding critic of the AC72 class of yacht.

"For participation you need somthing that's more realistic pricewise," added Dalton, 56, who expects to leave the America's Cup scene. "Oracle has done an amazing job with their technology."

A lower bar-to-entry could mean simpler boats with more off-the-shelf parts. But the main focus will be reducing the massive on-shore staff needed to build, maintain and operate the sophisticated sailing machines, which for this regatta climbed into triple digits.

Ellison, one of the richest men in the world, indicated that he was inclined to remain in San Francisco in the next defense with some form of foiling multihulls that were able to reach speeds above 50 mph. But he did not want to go backwards in a regatta he said had "changed sailing forever."

"It's no secret that these boats are expensive and we'd like to have more countries competing next time," said Ellison in a post-race news conference with Spithill, tactician Ben Ainslie and strategist Tom Slingsby. "So we are going to have to figure out how we'll accomplish both – get more countries competing at the same time but keep it as spectacular as it was in this last regatta."

Another question are the teams themselves. Sailors are the ultimate free agents and often scramble to latch on to teams soon after the Cup. Ainslie, the four-time Olympic gold medalist who joined the afterguard when Oracle was struggling at the start of the race, hopes to mount a challenge from Britain. He said he was unsure if he would return to Oracle.

Spithill, 34, who is married to an American and has two children in local schools, said he expected to be back. "I'm not going anywhere," the fiery Austalian said. "You always see a couple of changes. That's natural in team sports. We're going to hang on to the key guys."

Ellison said Oracle CEO Russell Coutts, a four-time Cup winner previously from New Zealand, could "keep his job as long as he wants."

An ebullient Ellison had made few public comments about his controversial boats following the death of Team Artemis sailor Andrew Simpson in a training accident in May.

"These boats were meant to be extreme but they were certainly not meant to be life threatening," he said.

"I felt that I should keep my mouth shut and let the boats and the sailors demonstrate whether the decision was right or wrong," he added.