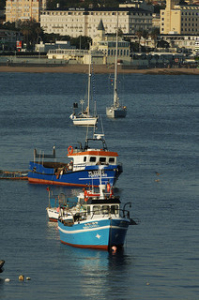 Two Australian fishermen survived a 15 hour ordeal adrift in the Pacific  Ocean by clinging on to an ice box after their boat sank.
Rescuers found the pair clinging to a large white cool box a short  distance from their capsized boat.
The men sent out a mayday message after they had to abandon their boat off  the coast of New South Wales, Australia.
They were pulled to safety by the Westpac Life Saver Rescue Helicopter at  around 6.30am on Saturday December 21st.
The sailors suffered shock and exposure, but both are in a stable condition in Lismore  Base Hospital.
"They had been in the water holding on to this object for about 15 hours" one  of the rescuers, Jethro Lampie, told Australia's Nine TV News. "They weren't too  lively, but were happy to see us."