Mega-Yachts Cleared to Sail Into the Heart of Venice 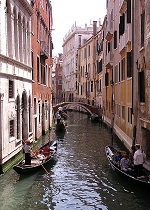 A regional tribunal has overturned the Italian government’s partial ban on large cruise ships passing through the heart of Venice, pending a court hearing in June.

The tribunal ruled that “the ban can only be allowed when an alternative route becomes available”. While the Venice Port Authority has recommended dredging the Canale Contorta Sant’Angelo so that ships can enter the port without sailing through the city, no definitive agreement on the plan has been reached. The cruise ship industry, a major employer in the city’s tourism-driven economy, welcomed the news of the suspension. Venezia Terminal Passeggeri, the company that manages ten terminals, five berths and seven quays at the port, said it “confirms what we have always maintained on the non-existence of any danger or damage caused by ships in the lagoon”.

The tribunal’s ruling is effective until 12 June, when the issue will be discussed in court. In the meantime, eyes are on the new government under Matteo Renzi to decide which alternative route cruise ships can take to reach the port.

In a recent visit to Venice, the culture minister Dario Franceschini said it was “unthinkable to allow such giants to pass right in front of St Mark’s. They are a risk and an insult to the splendour of Venice”.

In 2013, the World Monuments Fund put Venice on its list of “Watch Sites”, citing the “negative impacts [of cruise tourism] on both the historic fabric and the social wellbeing of the city”.