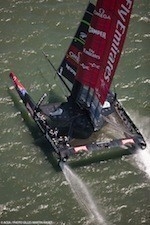 The Italian team said it would wait until an international jury decides its protest against safety measures introduced by regatta director Iain Murray. The jury is schedule to convene Monday. It is not known how long it will take to decide what has become an extremely thorny issue.

Instead of a race Sunday, fans will see only Emirates Team New Zealand on the race course beginning at 12:15 p.m. The Kiwis apparently will have to sail the entire course, although officials could decide that New Zealand needs need only to make a brief appearance to be declared the winner and pick up the first point of the Louis Vuitton Cup challenger series.

"This isn't unexpected, but it is still disappointing," said Stephen Barclay, the CEO of the America's Cup. "It's a case of won't race, not can't race.

"The people really hurt by this are the fans, who have waited for over two years to see the first race in these spectacular AC72 catamarans."

Barclay pointed out the Italians practiced Saturday. "What I don't understand," he said, "is they sailed today, they say they will sail if they win or lose the protest, but they just won't sail against Emirates Team New Zealand on Sunday."

Louis Vuitton spokesman Bruno Troublé did not come down hard on Luna Rossa, saying, "We are in favor of fair rules for everyone." But he said he felt "sorry for the people of San Francisco" that there wouldn't be a race Sunday.

Officials and other sponsors had to be dismayed about the Italians' pullout. Team New Zealand had also protested Murray's stipulation that teams use wider, heavier rudder wings, yet the Kiwis were willing to go on with the show.

New Zealand skipper Dean Barker confirmed Friday that his team "will be out there, ready to race."

The Italians made no comment in their two-paragraph announcement, except to refer to their protest announcement Tuesday in which they said Murray "blatantly breached the rules governing the 34th America's Cup and has exceeded his jurisdiction and authority."

Luna Rossa and Team New Zealand don't like the new rudder-wing rule, feeling it won't be safer and might put them at a competitive disadvantage against Oracle. The two challengers have identical boats because the Italians bought the design of the Kiwis. The teams agreed to the deal to cut costs in what has become an astronomically expensive campaign for all the teams.

The two challengers say the new regulations were not put into effect until June 29. Murray, however, said all parties agreed to them when he presented them on May 22, two weeks after a capsize by Artemis Racing that cost a crew member his life.

While Luna Rossa's announcement put a damper on the competition, fans gathered at the America's Cup Pavilion to take part in what was billed as the "Ultimate Fan Photo," a group shot of the crowd with the America's Cup.

Australian sailing hero John Bertrand told reporters the rudder wings controversy reminded him of the fuss over the wing-keel on Australia II in 1983.

"We had Keel-gate back then and we have Rudder-gate now. So nothing has changed," said Bertrand, who skipped his boat to a victory in the inaugural Louis Vuitton Cup that year before becoming the first challenger to win the America's Cup in its 132-year history.