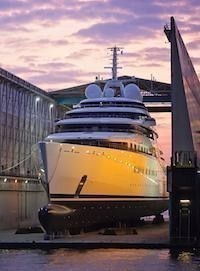 The long-awaited, long-discussed Lürssen Yachts project that was expected to eclipse even the world's largest yachts finally did so Friday at the shipbuilder's yard in Bremen, Germany. M/Y Azzam did just that and more. It surpassed Roman Abramovich's M/Y Eclipse – what was, up to that point, the largest yacht in the world – by nearly 20 metres (or about 65 feet).

With the groundbreaking size and scope of the project, Lürssen found that existing terminology – superyacht and megayacht – was far too restrictive. Apparently for this reason, in their statement, they called Azzam a "Super Mega Yacht."

The owner's identity is still shrouded in mystery, but many reports have stated that it is believed to be a Middle Eastern billionaire. Azzam is an Arabic name which means "determined," according to several websites.

The project's cost has been reported at more than $500 million (nearly £330 million).

Eng. Mubarak Saad al Ahbabi assembled the project's team which he personally directed in all areas of the development. "Under his leadership the original concept of the yacht was developed starting with the overall requirements with regards to general layout, size and performance and exterior style," Lürssen said. "His brief was to build a large luxury yacht with an innovative and timeless design that would be able to travel at high speed in warm and shallow waters, whilst providing luxurious and sophisticated accommodation to its guests."

Under Eng. Mubarak Saad al Ahbabi's oversight, the technical engineering was developed by Lürssen, the exterior design by Nauta Yachts and the interior design by Christophe Leoni. The overall effect, according to Lürssen, "is, without doubt, the most complex and challenging yacht which has ever been built."

Azzam breaks new ground in terms of dimensions, performance and technology, the shipbuilder said – adding that, on top of being the largest yacht in the world, she has impressive speed and a record in terms of building time.

"When she will be delivered later this year, she will have been in build for only three years following one year of engineering," said Peter Lürssen, a managing partner with the shipbuilder. "She truly represents another milestone in not only our history but yachting history as well."

Amongst many other features the yacht has a main salon with a length of 29m (nearly 100 ft) and a beam of 18m (60 ft) with an open plan and no pillars. In order to reach 30 knots, she is powered by a combination of two gas turbines and two diesel engines with a total of 94,000 horsepower. According to the Superyacht Times, Abramovich's Blohm & Voss yacht, Eclipse, is now the second-largest in the world at 162.5m (536 ft), which is followed closely by Sheikh Mohammed bin Rashid Al Maktoum's M/Y Dubai – a 160m (524 ft) vessel built by Platinum Yachts.

The fourth-largest yacht, according to the list, is M/Y Al Said, another Lürssen-built yacht at 155m (508 ft). The cruiseship-looking M/Y Prince Abdulaziz, built by Helsingor Vaerft in 1984 (the oldest in the top five largest by more than two decades), comes in at fifth, with a length of 147m (484 ft).