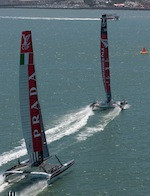 (Reuters) - Emirates Team New Zealand soundly beat Italy's Luna Rossa Challenge on San Francisco Bay on Saturday in the first real race of the 34th America's Cup, which in recent days looked like it might never come off.

Team New Zealand sped across the bay to finish with more than a five-minute lead over its Italian rival, solidifying its reputation as the challenger with the best chance of prying the America's Cup away from defender Larry Ellison's Oracle Team USA.

"We've got to be our own worst enemies in a way and be as critical as we can on performance," Team New Zealand skipper Dean Barker told reporters after the race. "But in general I'm very, very happy with the way the team is working together."

True competition had been held up by a series of misfortunes this year, including the death of one sailor and a dispute over boat design that recently threatened to derail the entire event before being resolved by an America's Cup jury this week.

The race followed the resolution on Thursday of the controversy over design rules, which were changed to improve boat safety after the fatal accident in May that left Sweden's challenger Artemis unable to sail. It marked the first real competition in the Luis Vuitton Cup, which officially started a week ago but had yet to see two boats compete.

Team New Zealand has logged more hours than Luna Rossa sailing the carbon-fiber AC72 catamarans, which have been criticized as dangerous and too unstable for the strong winds and rip currents in San Francisco Bay.

That was apparent on Saturday as Team New Zealand's AC72 spent much more time than Luna Rossa's yacht hydrofoiling with its hulls above the water during the long-awaited matchup.

Moments before the start, Barker maneuvered the New Zealand boat into a right-of-way position just on the downwind side of Luna Rossa, preventing his Italian rival from accelerating until after New Zealand.

New Zealand crossed the starting line first and built on its lead throughout the race. According to Cup rules, Luna Rossa technically did not even complete the match because it crossed the finish line more than five minutes behind the winner.

"Team New Zealand did a really good job in the prestart. It put them in a really strong position and from there on there's nothing you can really do," Luna Rossa skipper Max Sirena said.

Sirena said he expects his crew's performance to improve in upcoming matches as it gets used to sailing with a new set of daggerboards and rudders.

A late entry into this year's America's Cup, Luna Rossa bought the basic blueprint of its AC72 from Team New Zealand in order to speed up its preparation.

The winner of the Louis Vuitton Cup, which runs through August, will then challenge software mogul Ellison's Oracle team, which won the America's Cup in 2010 and is defending it this time.

The Louis Vuitton Cup officially got under way last Sunday, but Luna Rossa, backed by Prada fashion mogul Patrizio Bertelli, refused to sail while an international jury deliberated in a dispute over the design rules that organizers had imposed to improve the safety of the AC72s, which can lift out of the water on thin hydrofoils and reach speeds near 50 miles per hour.

That left New Zealand no choice but to sail the race course alone to win a point in the round robin series of matches. That bizarre spectacle was repeated by New Zealand on Tuesday and by Luna Rossa on Thursday to get credit for a race that Artemis, still working on a new boat, forfeited.

On Thursday, the jury threw out changes to the design rules, which affected rudder configurations and which Team New Zealand and Luna Rossa both opposed on the ground they gave un unfair advantage to Oracle.

Artemis, the Challenger of Record in the America's Cup, is readying a new AC72 after a capsize that killed crew member Andrew Simpson, an Olympic sailing champion from Britain, during a practice sail on San Francisco Bay.

Artemis last week warned that it would not be able to participate in the Cup if the jury were roll back the design rule, and its future in the competition is uncertain.